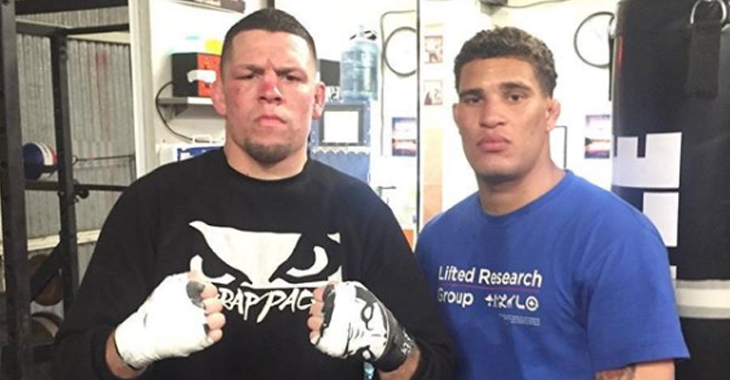 The plot continually thickens on the mystery of Nate Diaz potentially fighting Tyron Woodley. It was talking about, debated about, then put to rest. However, all of the sudden it looked like an option once again, until it was squashed by Dana White, which resulted in Woodley himself calling the man a liar. The most recent development is this curious post of Nor-Cal Fighting Alliance’s Jordan Williams. He was specifically chosen by Nate Diaz to prep him for his next fight.

“I am not going to lie, it feels pretty damn good when someone as good as caliber as Nate Diaz makes a special request for you to train with them to make sure they get a good look for a future fight that’s most likely going to happen. When you are preparing for war, it is best to practice your fight strategies against the highest level lieutenants in the army that you have. Thank you Nate Diaz for rolling up to Petaluma and getting that work put in with the squad.” – Jordan Williams via his official Instagram.

Hmmm….🤔🤔
Why would Nate Diaz request a stud wrestler like Jordan Williams, who is also a gigantic welterweight, to train with and properly prepare him? pic.twitter.com/jpYES9FVop

Jordan Williams is a big welterweight. So big in fact, that he just recently moved up to middleweight. Although for the third time all signs point to an upcoming bout with Tyron Woodley, the key takeaway from this is that Nate Diaz is training for a fight with someone. All we can do is wait and keep our eyes and ears on high alert for any more updates until something is finally made official. At this point, any fight wouldn’t be a surprise. Does this further prove that White wasn’t being truthful? Or is Diaz just stirring the pot with everyone?

“He said Nate Diaz was offered 6 people. {…] Why would I mention Diaz out of nowhere? Why would he start training? Why would he or his team just all the sudden demand a $15 million pay day? I was offered the fight.” – Tyron Woodley on White calling him a liar. #TheMMAHour