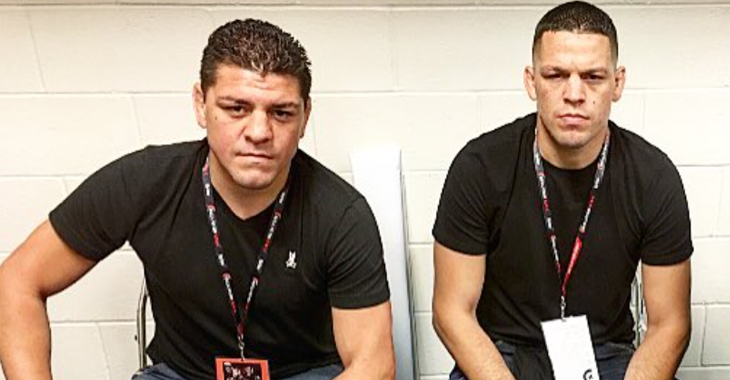 It’s no secret that the UFC brass and Stockton California’s very own ‘Diaz Brothers’ don’t exactly see eye to eye all the time.

The pair have frequently been involved in public disputes over things such as fighter pay, contract negotiations, and upcoming fights. With that being said of course, it appeared as though after Diaz defeated Conor McGregor at UFC 196 that Nate Diaz and UFC President Dana White had turned a new page in their story, one that even saw White allow Nate Diaz to land the ‘Stockton Slap’ onhim in a clip which quickly made the rounds on social media. Interestingly enough however, Nate Diaz recently revealed a story that included he & his brother being forced to sneak into UFC 205.

“They didn’t give us tickets. I snuck in that motherf—ker. Some dude that works security that saw us trying to get in, we were just trying to buy tickets … I text f—kin’ Dana like, ‘What’s up?’ and he was like, ‘Man, we’re sold out.’ And I’m like, ‘I don’t give a f—k, I don’t want a ticket. Grab me at the front door and walk my ass in.’ F—k you talking about, I don’t have tickets, I’m sorry. … That’s crazy.”

“I went to the top and there was some, like, booth up there. It was just me and my brother. We got in kind of crazy – one guy snuck me in one way and another guy snuck my brother in another way. That’s crazy. I just wanted to go to the event. I was like, I swear I won’t make a ruckus.”