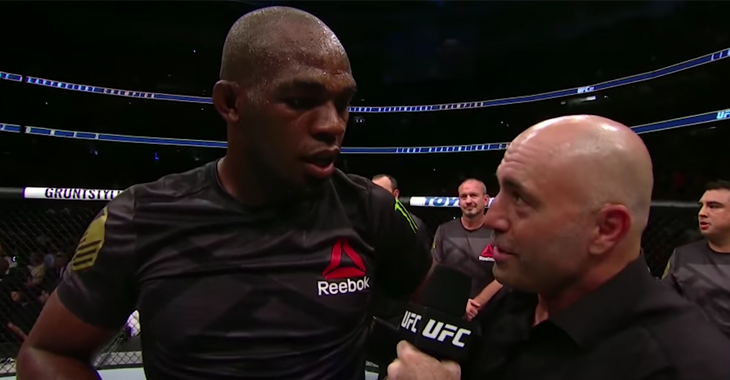 While we all are still waiting for the final verdict on Jon Jones, some aren’t as eager for him to comeback. There are countless fans who just want what could very well be the greatest fighter of all-time to return to the Octagon, but for every t-shirt wearing ‘Bones’ supporter, there is one who has just been burned too many times. Former UFC women’s bantamweight champion Miesha Tate sounds like one of those fans.

“The thing is, I don’t really care at this point if [Jon Jones] comes back because I’ve lost the motivation and the interest, and the faith that I have in Jon Jones has been lost. Now maybe in three, four years, if he gets a great suspension [from the USADA], if he gets the book thrown at him and he really does make those changes, maybe he has a chance at restoring [his legacy], but at this point I just don’t care anymore. I don’t care. I’m over Jon Jones. I’m done with it.

“”I don’t really care at this point if he comes back”@MieshaTate explains to @RJcliffordMMA why she has no desire to see Jon Jones return to MMA anytime soon. pic.twitter.com/gCyq3N0mbB

“I don’t want to hear his sob story. I felt sorry for the first, second time he kind of had me. But it’s like, fool me once, shame on you; fool me twice, shame on me. Fool me three times, I mean, come on, am I waiting for a fourth now? I just don’t — I’m over it. I wish and I hope that it does change Jon Jones, but I’m also not invested in Jon Jones anymore. I guess it’s what it is. I’m kind of checked out at this point. It’s just been too many times, too many instances. […] He’s got to do a lot more to gain me back as a fan and to care to see him compete again. I just don’t want to be let down again.” — Miesha Tate speaking on the MMA on SiriusXM radio show.

After the California State Athletic Commission hearing yesterday, Jon Jones had his license revoked and was fined $205K. However, that’s just half of the consequences. The CSAC are letting USADA deal out the subsequent suspension, which they estimated to be between 18 months to two years. Regardless of how long he may be out, there seems to be a line drawn in the sand as Tate has demonstrated the other side: Will you care for the hyped return of former UFC light heavyweight champ Jon Jones, or is this too many strikes to support anymore?