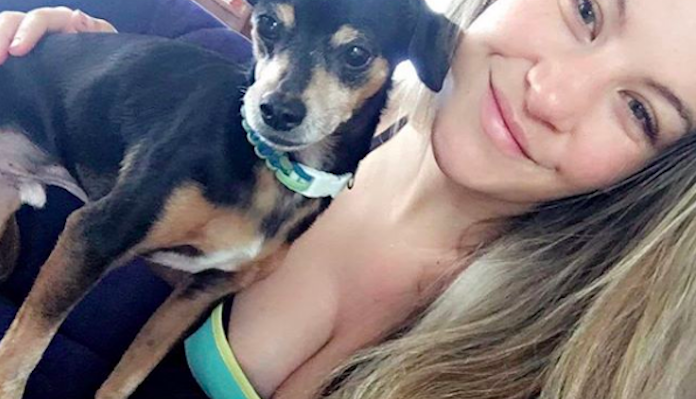 In a few short months, former UFC women’s bantamweight champion Miesha Tate will be a mother. Of course, she’s already a mother in a less traditional sense, as the owner of a dog named Skooter.

On Monday, Tate took to Facebook to share a harrowing tale, during which Skooter’s very life was in jeopardy. Apparently, while out for a walk in the neighborhood, Tate’s furry companion was attacked by a Cane Corso – those are big dogs if you’re not familiar.

In a frenzy of motherly instinct, a seven-months pregnant Tate said she tackled this brutish beast to defend Skooter. Luckily, it sounds like mother, baby and dog are all safe and healthy, save for a couple of scrapes. See Tate’s post below:

So this happened a few days ago, my dog Skooter and I were out for a walk around the neighborhood when a Cane Corso…

“So this happened a few days ago, my dog Skooter and I were out for a walk around the neighborhood when a Cane Corso escaped from its back yard and proceeded to sprint after my dog. I could tell by the body language and hair raised this was no friendly approach. Before I knew it the dog was over the top of Skooter and just as it went to bite I tackled the dog. I pushed her off of my dog and quickly scooped up my pup as she ran off. I couldn’t believe what happened it was all so fast. I stood there for a second in disbelief and shock, I could have lost my best friend that day”

“Luckily Skooter had a mild scrape on top of his head and a wet ear and scuffed up paws but otherwise he’s ok….I’m so glad it wasn’t worse, I’m glad I could get to them before she latched on to Skooter and thankfully she was not aggressive towards people. Later, part of me felt guilty for potentially putting my baby in danger at 7 1/2 months pregnant but it was instinct I had no time to think and I am sure I would react the same way every time. There is no way I could have watched my dog get shredded to pieces. 2 things surprised me though, 1 I can still move pretty quick for a prego and 2 I still got some fighting spirit in me. Don’t push mama bear lol!”