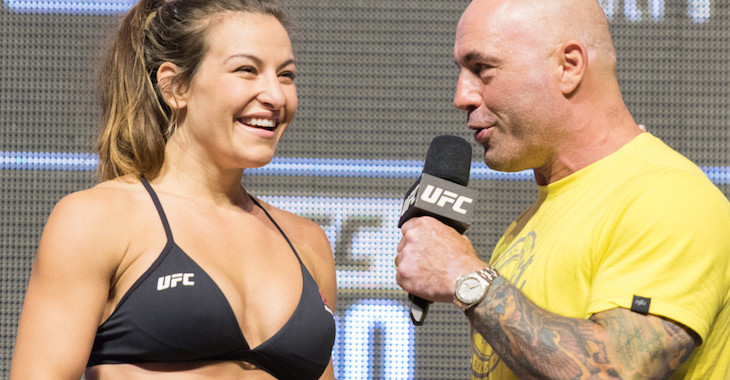 Former UFC women’s bantamweight champion Miesha Tate has some big, big news. Now that her fighting career has drawn to a close, she’s opening an exciting new chapter –  as a mother.

On Monday morning, the former champ announced this exciting news in a post to Facebook, asking that the fans and media respect the privacy of her and dad-to-be Johnny.

“Happy New Year everyone! 2016 & 2017 were crazy years full of transitions for me but I’m so happy where I’m at now moving into 2018. I have many things to be grateful for but one stands out in particular, you see there’s this man who has brought joy and happiness into my life in a way I’ve never known before, Johnny thank you for that. I’m proud to announce we are expecting a beautiful baby girl. Now you can sit and speculate… or you can just be happy for us. I’d like to ask that everyone respect the fact that (like we have been) we would like to continue to live our private lives primarily out of the media. I won’t comment on specifics so just know that I am very happy, very excited and my life has never felt so complete. Thank you all for the continued support on this crazy journey we call life!” – Miesha Tate on Facebook.

Miesha Tate has not fought since November o 2016, when she gave up a decision to former TUF pupil Raquel Pennington. She announced her retirement in the cage after this loss.

Tate’s loss to Pennington was preceded by a brutal stoppage loss to reigning UFC women’s bantamweight champ Amanda Nunes, which marked the end of her title reign. Tate captured the title in her next most recent bout, putting Holly Holm to sleep with a thrilling, fifth-round submission.

Congratulations to Miesha Tate on this exciting news!