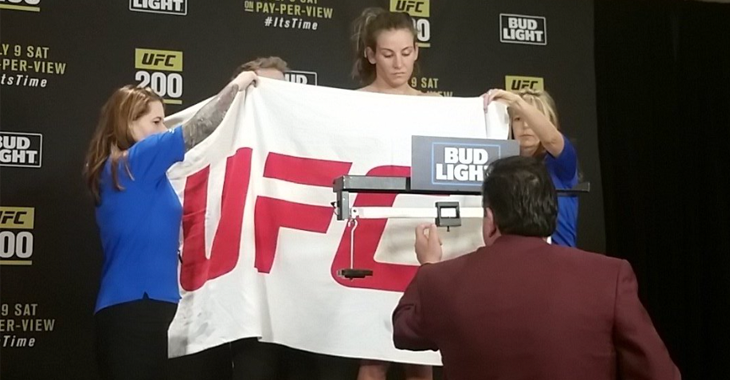 The drama of UFC 200 continued today during the weigh-ins in Las Vegas, Nevada.

Fighters are getting used to a new early weigh-in procedure that the UFC petitioned the Nevada Athletic Commission to implement, which gives fighters more time to hydrate before their actual fights.

Johny Hendricks’ weight issues remain a problem and was the only fighter on the card to miss weight. Hendricks came in at 171.25 pounds, missing weight by .25 pounds. Hendricks’ opponent Kelvin Gastelum made the non-title welterweight limit, weighing in at 171 pounds. By missing weight, Hendricks automatically forfeits 20 percent of his fight purse to Gastelum.

UFC women’s bantamweight champion Miesha Tate nearly had the UFC 200 main event championship bout with Amanda Nunes canceled by missing the cut-off time for weighing in, which was at 10am PST. Tate checked in with little time to spare and stripped down and had a towel facing those in attendance of the early weigh in, weighing in at 134.5 pounds. Nunes made weight, coming in at 135 pounds.

UFC spokesperson Dave Lockett told MMA Fighting that if Tate had checked in for the weigh-in after 10am PST, her fight would have been completely canceled.