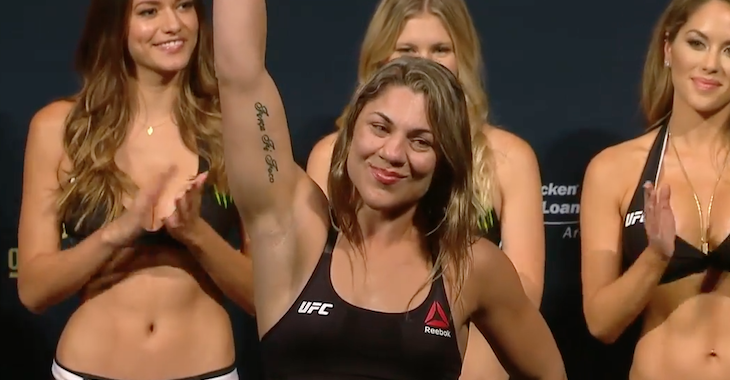 When Miesha Tate stepped onto the canvas with Raquel Pennington at UFC 205, it marked her opportunity to rebound from her loss of the UFC women’s bantamweight title. Instead of returning to the win column as the odds suggested she would, however, a lackadaisical looking Tate was soundly out-hustled from bell-to-bell, surrendering a unanimous decision to her foe as a result.

In the moments after this decision was loss, Tate surprised the MMA community by announcing her retirement from the sport. Given her status as a women’s MMA trailblazer and a great of the bantamweight division, Tate’s retirement announcement was met primarily with well-wishes and pats on the back. Not everyone, however, was willing to let Tate ride off into the sunset on a positive note.

Former women’s bantamweight title contender Bethe Correia, who recently called for a bout with Tate, believes the veteran’s surprising retirement is an indication of a fragile mental state. Correia explained this opinion in a recent Q&A with fans (via MMA Fighting).

“She showed she’s bipolar because when the UFC didn’t want her fighting for the belt, she wanted to retire. She lost to Raquel and got herself in a bad phase, lost to Amanda, and announced her retirement,” Correia said. “When you’re not going the way you want and you run away from it, that shows weakness.” Correia went on to explain that, like Tate, she’s endured plenty of low moments throughout her career, but she did not let these low moments drive her to retire.

“I’ve been through a lot of tough moments in the UFC and never wanted to retire. Quite the opposite. My fight against Ronda left a damage here, and I want to fight more, win more, to have experience, in order to have Rousey vs. Correia 2, maybe here in Sao Paulo, so it can be very different, and leave with my head up.”

Finally, Correia shed some light on her beef with Tate, and explained her desire to lock horns with the WMMA great.

“My history with Miesha Tate is very old,” she explained. “First, she called me out as an athlete on social media, and also said a lot of bad things about my personal life, demoralized me as an athlete, and I wanted to fight her, but our paths went different directions.”

“I even said I’d fight her for free, in any card, in her backyard,” she said. “Because I still have the things she said about me stuck in my throat, especially about my loss to Ronda. She said some bad things, but in the end I saw that her attitude, announcing her retirement, that I’m way above her.”

What do you think of Correia’s comments about Tate? Sound off, PENN Nation!