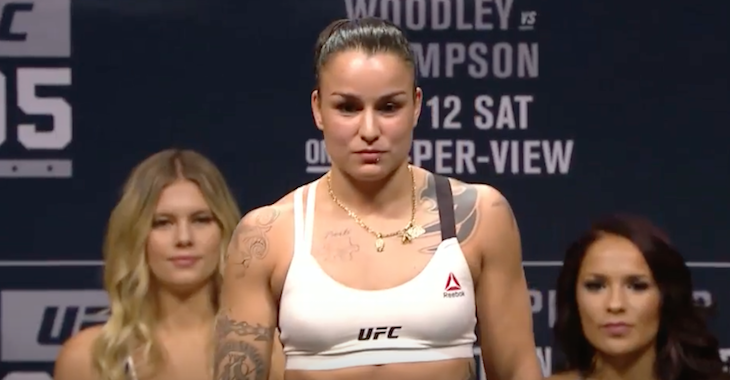 Round one begins and Tate starts things off with left. They exchange quickly. Miesha with a low kick. She follows up with a right. Pennington counters with a strike. Tate circles and lands an inside leg kick. Pennington with a right hook and then a jab. She lands another. She is applying pressure. Miesha with an inside leg kick. A nice leg kick and then a jab scores for Raquel. Miesha is already busted up. She pushes forward. Raquel lands an uppercut. Miesha presses her against the cage and begins looking for a takedown. She attempts a double leg. Raquel defends and locks in a guillotine choke. It is deep. Miesha wall walks on multiple occasions to survive the choke. Wow. Miesha Tate scores the takedown after all of that. Pennington scoots to the cage in attempt to wall-walk. She is able to get back to her feet. Miesha is on her back though. She is attempting to take the back of Pennington along the fence here. Pennington drops down for a submission and the horn sounds to end round one.

Round two begins and Tate misses with an early left hand attempt. Raquel presses forward and lands a jab and then a right hand. Miesha is circling here but is having trouble finding her range with shots. Another nice jab lands from Pennington. She lands a right and then an uppercut. Tate presses her against the cage and lands a knee. Miehsa locks in a clinch and lands some good knees inside. Raquel lands a good uppercut. She gets Tate’s back while standing. Raquel gets Miesha against the fence and starts unloading uppercuts and rights. Miehsa clinches up. “Rocky” presses her against the cage and lands a knee. Tate switches the position and press Raquel against the fence. Tate with a knee. She lands some body shots. Pennington counters with some shots in the clinch. Miesha with a nice right hand to close out round two.

Round three begins and Tate starts off with a jab. She attempts to pull guard on her feet. Pennington allows it to happen. Miesha with an armbar attempts. She rolls for a triangle but Raquel defends and Tate quickly transitions back to an armbar. Miehsa gives up on the armlock and attempts a heel hook. It is not there and Pennington winds up in north-south position. Big elbows from Raquel. Miesha however fights her way back up. Pennington with a choke. Tate defends but winds up on her back. Tate with another heel hook attempt but it is not there. Raquel will just not let Miesha up. She locks in another guillotine choke. Miesha stands up in the lock and begins working for a takedown. It is not there and Raquel pushes her against the cage. She drags Miesha to the floor and begins working some ground and pound. Tate covers up. A big elbow from “Rocky”. Round three comes to an end.