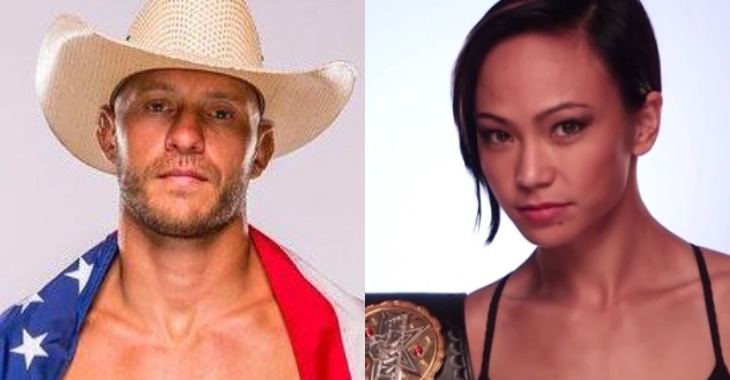 This Saturday night, in the co-main event of UFC on Fox 24, “The Karate Hottie” Michelle Waterson will take on long-time contender Rose Namajunas in a key strawweight bout. If she wins, she will emerge as one of the division’s top contenders, and could well earn herself a shot at Joanna Jedrzejczyk‘s ferociously guarded strawweight title.

Needless to say, Waterson is one of the best strawweight fighters on earth. If it weren’t for the encouragement of a fellow UFC star, however, she never would have stopped being a ring card girl and started a career as a fighter . That UFC star is fan favorite lightweight turned welterweight Donald “Cowboy” Cerrone. Waterson explains Cowboy’s involvement in her early career in an Interview with The Buzzer on Fox Sports. See it below, followed by a transcription.

.@karatehottiemma told @anezbitt that she went from being a ring girl to being a pro fighter… thanks to @Cowboycerrone. pic.twitter.com/1d3ZCsjpMk

“I grew up doing martial arts, and I remember watching [some] fights and being like, wow, what they’re doing on the inside of the Octagon looks way more fun than what I’m doing here on the outside,” Waterson said.

“So I talked to a promotor [about fighting], and he kind of [said], ‘pssht’ and blew me off. But Donald overheard me talking about how interested I was, so he came into my job and left me a note and was like ‘Hey if you’re serious about getting into fighting, get your butt in the gym.”

Waterson then explained that Cowboy encouraged her to jump right into the fire as a pro when her originally planned amateur debut was cancelled at the last minute.

“I turned pro without having any amateur MMA fights,” she said. “Yeah, because Donald was like, ‘well, you’ve been training, whatcha gonna do?’ And I was like ‘I’m going to fight!’ And then I fought.”

Waterson will enter her fight with Namajunas on a two-fight streak, having choked Angela Magana and Paige VanZant in her first two bouts in the Octagon. The 31-year-old is 14-4 in sum.

What do you think of this origin story from Michelle Waterson? Sound off, PENN Nation!