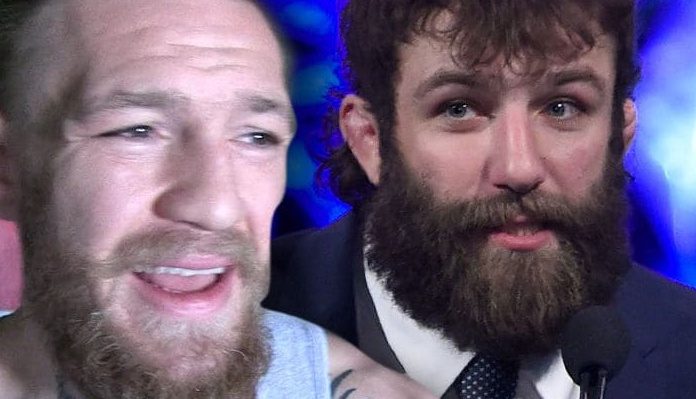 The fallout from a non-fighting related incident was unlike anything we’d ever seen before in the UFC during UFC 223’s fight week.

As everyone knows by now, it was the infamous fighter bus attack by Conor McGregor and his dolly throwing ways.

Both men suffered injuries from the broken glass caused by McGregor resulting in them backing out of their fights with Brandon Moreno and Anthony Pettis respectively.

The drama didn’t end there as Nurmagomedov’s opponent at the time, UFC featherweight champion, Max Holloway would end up not being able to make weight for their bout resulting in Nurmagomedov needing a replacement. This would end up being Al Iaquinta who was supposed to be competing against Paul Felder in the evening’s main card opener.

The weigh-in issue was unaffected by anything McGregor did or had done which put things into perspective for Chiesa who believes it could have been him challenging for the 155-pound crown rather than his dance partner in the finals of The Ultimate Fighter 15, Iaquinta.

“I don’t really got a lot to say to [McGregor].” Chiesa told MMAFighting, “I lost a title shot. I have proof. I was the highest-ranked guy on the card. I would have stepped in to fight Khabib at the drop of a dime. I’ve always loved the fight with Khabib. Bless his heart, he’s a cool ass guy. But this is a sport and I’ve always liked the way I matched up against him and I got f*cked out of that opportunity. I don’t really have too many kind things to say to [McGregor]. You work your whole life for those kinds of opportunities. Do I want mine on short order? No, I’d love a training camp. Like I said, if they walk in the door now and say, ‘Hey, do you want to fight for the title in the next 10 minutes?’ I’m out the door, I’m warming up, I’m ready to go.

To lose the opportunity, that’s tough. You know how this sport works, guys. Opportunities like that don’t come along. I could strike along 15 wins in a row and still not get a title shot and I lost my opportunity and my dream. I hope that I’m gonna fight my ass off to earn it back starting on July 7th against Anthony Pettis. But yeah, tough pill to swallow.”

The TUF 15 winner, Chiesa does make an interesting point about his ranking as the previously mentioned Felder was looking to fill in for Holloway but was rejected by the NYSAC for having too low of a ranking in the UFC’s rankings.

Chiesa now finds himself rebooked to take on the former WEC and UFC lightweight champion, Pettis at UFC 226 next week on July 7th.

Still getting asked about McGregor and the incident, Chiesa says he isn’t thinking about it anymore and just wants to get things back on track.

My love for mixed martial arts will never waver. My love for the UFC will never waver. Just because one guy played up some theatrics WWE style and took it a bit overboard and affected the lives of fighters and workers with the UFC, I’m not gonna let one person’s actions fiercely affect how much I love this sport. The day I fall out of love with it, I’m hanging it up. It’s not worth it. If you’re gonna get punched in the face, elbowed, cut up, busted up, injured, have to cut weight, have to bring yourself to the brink of death to show up the next day and try to put on the performance of your life, you’ve gotta love it. And if I don’t love it, it’s just not worth it to me. And that love will never die. I’m not gonna let one guy spoil the party.

I’m just not thinking about [the McGregor incident]. I don’t waste energy on that. I’ve wasted enough. Brooklyn was a f*cking heartbreaker, to say the least. And this is the most I’ve said about it. I’ve tried to stay mostly closed off, but f*ck it. You guys want some answers, you got some.”