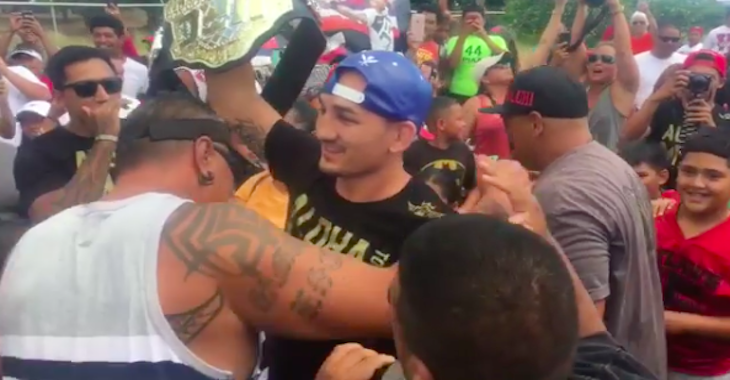 Last Saturday night, in the main event of UFC 212, UFC interim featherweight champion Max Holloway stepped into the cage with the goal of unifying his title with the undisputed title owned by Jose Aldo. For the first two rounds of the fight, it looked as though Holloway was in trouble, as Aldo seemed to be in control, rattling his young foe with hard shots on more than one occasion. In the third, however, the tide turned in Holloway’s favor. Aldo began to fade, and Holloway cranked up the offense. Before the third round ended, he was being peeled off his legendary foe for a third-round TKO win.

With this win, Holloway became the UFC’s undisputed featherweight king. Now 18-3 in sum, and 11-0 in his last 11 fights, he seems poised to embark on a dominant run as UFC featherweight champion. In the meantime, however, Holloway has made a return to his native Hawaii, and from the looks of it, he received a hero’s welcome when he landed on the island.

At the moment, it is not known which featherweight will get the first crack at the new champ Holloway. The frontrunners in that regard, however, are former lightweight champion Frankie Edgar, and long-time featherweight contender Cub Swanson.

Do you think Max Holloway will end up being a dominant champion?