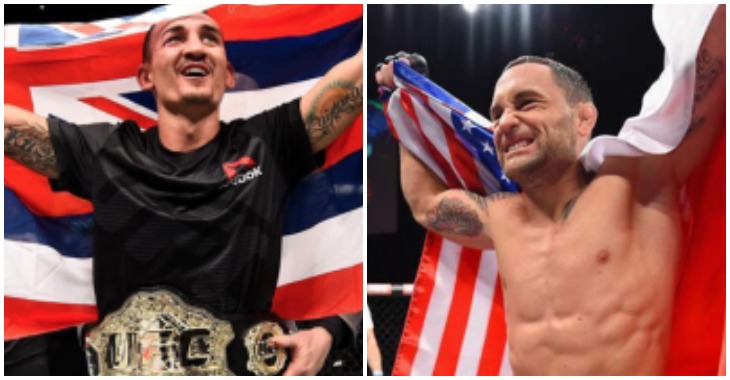 Last Saturday, in the main event of UFC 212, Max Holloway ushered in a new era in the UFC featherweight division by taking out once dominant champion Jose Aldo with third-round punches. While many new champions are quick to call for money fights, Holloway quickly made it clear that this will not be his focus. Instead, he plans to channel Demetrious “Mighty Mouse” Johnson and defend his new title as many times as possible.

When it comes to opponents for his first title defense, there seems to be two men at the top of the list. One is Cub Swanson, who Holloway has defeated before. Swanson has been voraciously campaigning for the fight on social media over the last 48 hours. The other is Frankie Edgar, one of the few top featherweights Holloway is yet to fight.

Speaking to FloCombat.com, Edgar explained that he wants the first crack at the new champ Holloway, and that he’d happily fly to Holloway’s native Hawaii for the fight.

“I’ve been fighting the best competition fight after fight only high ranked guys,” Edgar said. “I’m the only one Max hasn’t fought yet. If Max wants to be this dominant champion and clear the division he would have to face me.  I’d imagine he would want to test himself against someone like myself and not someone he has already finished.”

“I saw Max says he’d like to add another former champ to his list,” Edgar said. “I wouldn’t mind fighting in Hawaii and conquering the king in his own land.”

Whether the UFC gives the next shot at Max Holloway to Cub Swanson or Frankie Edgar is difficult to say. Either way, the new champ has some stark challenges to look forward to over the coming months.
Who do you want to see Max Holloway fight next?