Home » Man with cerebral palsy and cancer receives blue b... 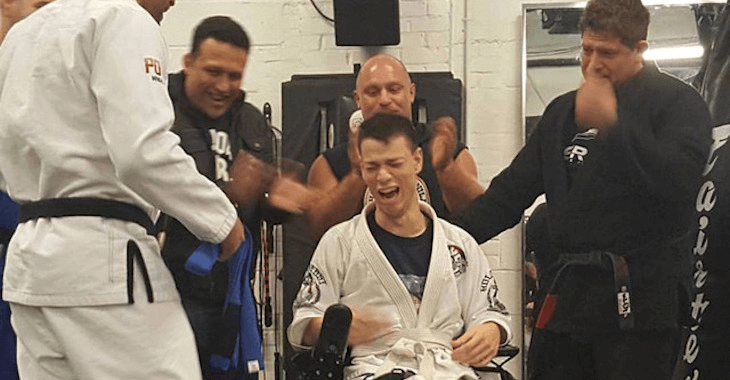 Ian Matuszak is a twenty year old man who suffers from a disease called cerebral palsy, a disorder that primarily affects muscle movement and bodily function. The disease impacts the lives of millions of people and Matuszak can be viewed as an inspiration for those who suffer from it. Matuszak also recently found out he has stage three esophageal cancer, but that didn’t stop him from getting where he wanted to be with his grappling career.

Ian Matuszak pushed through pain and adversity and was rewarded his blue-belt in jiu-jitsu recently, but it wasn’t your average belt-ceremony.

Over two-hundred people were in attendance as Brazilian jiu-jitsu instructors Dave Patton and Pete “Drago” Sell rewarded Matuszak his belt. UFC Middleweight Champion Chris Weidman, Al Iaquinta and Aljamanin Sterling were all in attendance at the emotional ceremony to watch Ian Matuszak achieve a goal he set out to complete years ago.

“He trained before the cancer diagnosis at least twice weekly” Patton told Fox 9. “He’s done two tournaments. One was for people with disabilities and the other was a regular tournament. We had people come from as far as North Carolina to the fundraiser. He’s one of the hardest working and driven people I’ve ever trained with.”

If you would like to show some love, donate to Ian’s “GoFundMe” page by clicking here!