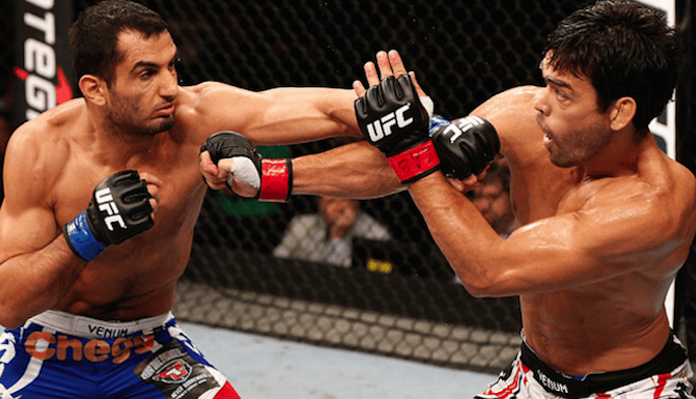 Mousasi believes Machida has abandoned the UFC in hopes that the drug-testing will be less stringent in Bellator.

“He’s older, and there was drug testing in the UFC,” Mousasi told MMA Fighting (via BloodyElbow).

Of course, there is also drug testing in Bellator, and Mousasi says Machida will most definitely be subjected to it if they fight.

“I think he’s in a different stage now, and if he wins his [debut] fight, and he’s the contender, we’re 100% gonna [fight again],” Mousasi said.

“If I fight him, he would need a lot of drug testing, too.”

Needless to say, Mousasi feels that Lyoto Machida has abused performance enhancing drugs at various points in his career. He points to Machida’s physique as the proof.

“Look at his physique, I think that says enough,” he said. “He’s a skilled guy, no doubt about it, but when you get older, everything goes a little bit downward. Fighters, they cannot fight until 47 years old as they did before. If they’re clean, it’s difficult, especially against high-class fighters.”

“They can beat a little bit lower guys, but against top competition, it’s difficult when you’re 41 or whatever and still be able to physically – skill-wise, maybe, but on the highest level, small things make a big difference.”

This account from Mousasi, of course, does not line up with Machida’s telling of things, who claims he signed with Bellator because they made him a strong offer, and because he’s a man of his word.

“I went to Bellator and they made me an offer I couldn’t refuse,” Machida said on Ariel Helwani’s MMA Show this week. “Everything was okay. UFC did match everything, but I was keeping my word to Scott Coker an Mike Kogan.”

What do you think of Gegard Mousasi’s comments on Lyoto Machida’s move to Bellator?