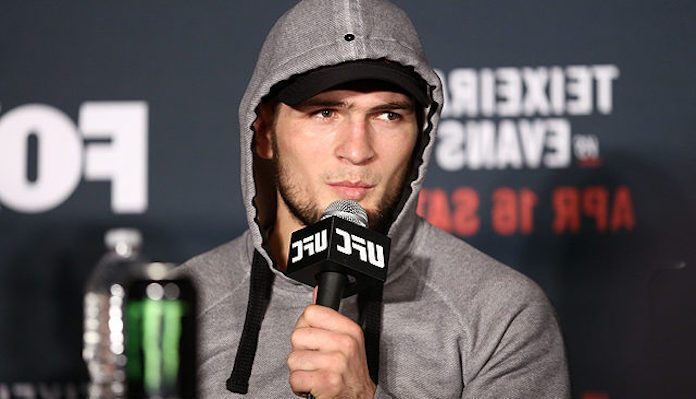 According to ESPN’s Brett Okamoto, who spoke with Nurmagomedov’s manager Ali Abdelaziz, this fight will mark the first obligation on a brand new UFC contract for the Russian champion. More interestingly still, this contract allegedly includes a clause in the event that Nurmagomedov ever gets his long desired fight with Georges St-Pierre.

In addition to UFC 242, Khabib Nurmagomedov has signed a new multi-fight deal with the UFC, per his manager Ali Abdelaziz. Terms not disclosed, however Abdelaziz said there is a clause in the contract in the event Khabib ever fights GSP. That's apparently already been negotiated.

“In addition to UFC 242, Khabib Nurmagomedov has signed a new multi-fight deal with the UFC, per his manager Ali Abdelaziz,” Okamoto reported on Twitter. “Terms not disclosed, however Abdelaziz said there is a clause in the contract in the event Khabib ever fights GSP. That’s apparently already been negotiated.”

Unfortunately, information on this alleged clause is still scarce. It’s not clear what exactly it specifies. That being said, it seems Khabib Nurmagomedov and his team are still not giving up on a fight with Georges St-Pierre.

St-Pierre, of course, is currently retired, and has not fought since late 2017, when he submitted Michael Bisping to win the UFC middleweight title. This victory over Bisping is the Canadian’s only fight since 2013, when he made a final defense of his welterweight title with a decision defeat of Johny Hendricks and then embarked on a lengthy hiatus.

Khabib Nurmagomedov, on the other hand, was last seen in action in October, when he submitted his arch rival Conor McGregor in the fourth round of the UFC 229 main event, retaining his title in the process. In his next most recent fight, he claimed the vacant title with a decision defeat of short-notice replacement opponent Al Iaquinta.

Do you think we’ll ever see Khabib Nurmagomedov and Georges St-Pierre fight, or is this just wishful thinking on the Russian champion’s part?