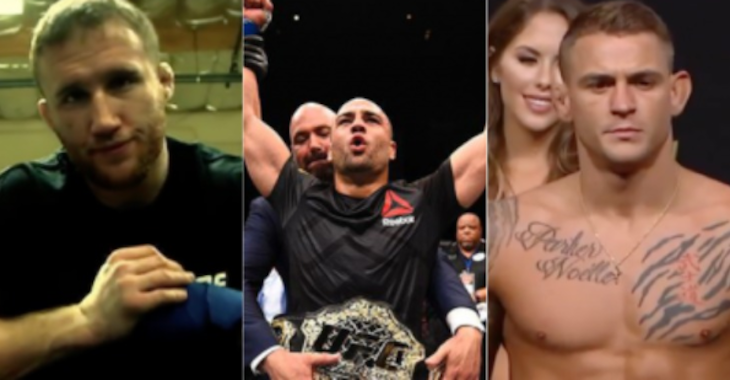 Shortly after his thrilling TKO win over Michael Johnson – which marked a successful UFC debut – former World Series of Fighting champ Justin Gaethje called out Tony Ferguson. Ferguson, however, didn’t appear to be interested in the fight, and UFC President Dana White later stated that the UFC is still hoping to pair Ferguson with Khabib Nurmagomedov.

With his desired Ferguson fight apparently off the table, Gaethje then suggested he’d like a fight with Eddie Alvarez as a backup plan. He made his call for a fight with Alvarez on The MMA Hour.

“I really want to go forward right now,” he said. “Eddie Alvarez is in front of me.”

“He’s number three. I want to fight the best in the world. I’m a huge fan of Eddie Alvarez. Nothing would make me more happy than to challenge that guy and get beat up by him, or beat him up.”

From the sounds of it, Gaethje may just get his wish.

According to a report from Ariel Helwani, the UFC is seriously considering a lightweight firefight between Gaethje and Alvarez. Apparently, the promotion is also considering making the two lightweights coaches of an upcoming season of The Ultimate Fighter.

UFC is targeting Justin Gaethje vs. Eddie Alvarez later this year, sources say. There has also been serious talk of them coaching TUF 26.

This news, unsurprisingly, did not go over well with another UFC lightweight star in Dustin Poirier. Poirier battled Alvarez back in May, and after rocking Alvarez badly, was shut off by a volley of illegal news, which meant the fight was ruled a no contest.

Rematch Poirier sounds fun.. Fight w@Justin_Gaethje might be even better .. Battle 4 America’s Most Violent …What do You fans Want lmk??

Who do you want to see Justin Gaethje fight next?