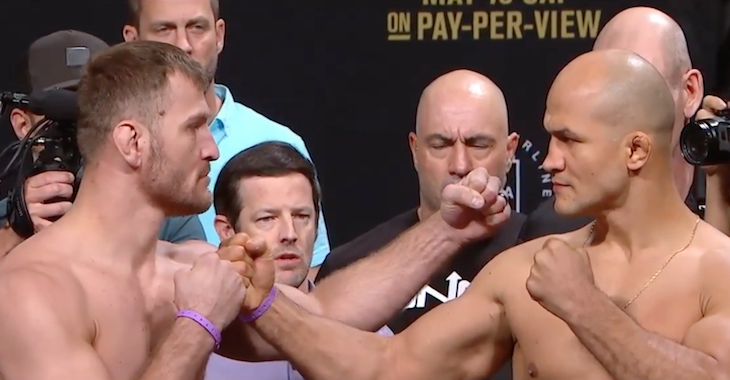 Last night, in the main event of UFC 211, former UFC heavyweight champion Junior Dos Santos failed to reclaim the title, as he succumbed to first round strikes dealt by reigning champ Stipe Miocic.

Despite this lopsided loss, an ever classy Dos Santos joined the media post fight to discuss his performance. Unsurprisingly, he was not happy.

“I’m very disappointed,” Dos Santos told the media of his emotional state (via MMAFighting.com). “Not because he won the fight, but because I lost. I didn’t do any mistake in the fight. Actually, everything was working very well. I know he walks forward all the time, and I like to walk backwards and enjoy the opportunities that my opponents give to me.”

“That’s the heavyweight division, you know?” Dos Santos continued. “I think I’ve made many, many guys feel like that. It’s terrible, man. It’s terrible. Because I was prepared — I am prepared. And I had a lot to give there and everything, like I said, everything was working very well. The way we expected. We knew he was a tough guy and he would walk forward all the time. And like I said, the kicks, something else I brought to the fight that worked, and then I’d have to watch the fight to see what happened.”

While he finds this loss very disappointing, Dos Santos explained that he’s eager to get back in there as soon as possible.

“I don’t pick opponents,” he said. “You know, I’m here to fight. And now I’m looking forward for my next fight already because I want to delete this thing. Man, I have to sit down to understand what kind of lesson God wants me to understand because, yeah…but I’m here. I’m still looking forward for my future fights because that’s what I love to do.”

How do you think Junior Dos Santos will rebound from this loss?