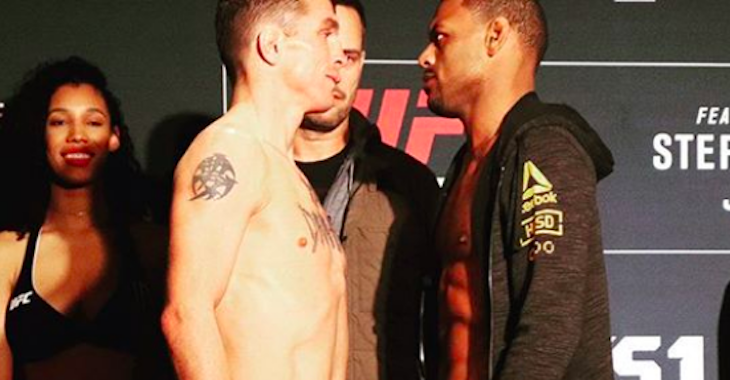 Sacramento’s Team Alpha Male has long been regarded as one of the top mixed martial arts gyms in the world. That remains true today, when the gym is home to former UFC bantamweight champion Cody Garbrandt, and two of the top featherweights on earth in Josh Emmett and Darren Elkins.

Emmett last fought in December, when he clubbed long-time contender Ricardo Lamas to a massive, first-round upset KO. Elkins, meanwhile, returns to the cage tonight, when he will take on former lightweight contender Michael Johnson on the main card of the UFC’s anticipated debut in St. Louis, Missouri.

Ahead of this UFC St. Louis card, Josh Emmett broke down his teammate Darren Elkins’ compelling scrap with the brick-fisted Michael Johnson. In his opinion, Elkins’ wrestling and pressure will simply prove to much for the former lightweight.

“[Elkins] has the [nick]name ‘The Damage’ for a reason, like he’s a gamer,” Emmett said of his Team Alpha Male stablemate on the latest stacked episode of BJ Penn Radio. “Michael Johnson, he’s a great fighter. He’s fast, he has heavy hands, but Darren Elkins, you have to put him away in order finish him. He’s gonna keep coming and keep coming, and then he can get it to the ground, get him against the cage, get him into some dirty boxing. He just excels at that and he… Man, he’s a tough, tough guy. He’s just gonna keep on coming and I see him breaking Johnson. You cannot break Darren Elkins.”

Elkins will enter his bout with Johnson on a five-fight streak, highlighted by a Comeback of the Year contender opposite Mirsad Bektic, and a split decision over Dennis Bermudez.

Who do you think comes out on top when Darren Elkins and Michael Johnson enter the cage together in St. Louis? Do you agree with Josh Emmett’s assessment?