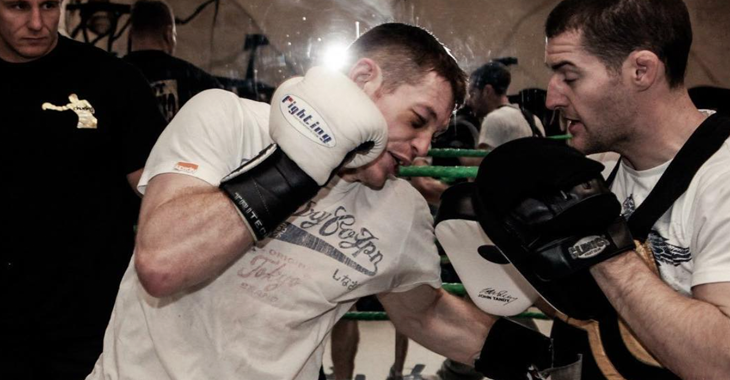 Nate Diaz, Artemij Sitenkov, and Joseph Duffy all have one thing in common: A win over UFC superstar Conor McGregor.

Duffy beat McGregor back in 2010 when the two fought in Cage Warriors where Duffy was able to submit “The Notorious” in just 38 seconds by arm triangle choke. Duffy recently renewed a contract with the UFC but also had a stint in professional boxing where he went 7-0 as a pro in 2013. So, with his experience fighting McGregor and in professional boxing, it’s interesting to hear his take on the whole Floyd Mayweather vs Conor McGregor madness that is set to take place on August 26. “The standard isn’t high enough for a boxing match, but MMA is very different,” Duffy said to MMAjunkie. “With the small gloves on, you haven’t got to be as technical because it’s easier for the shots to slip through and to get stoppages, and sometimes a wilder fighter can catch you off guard quicker than a technical fighter. It’s just different.”

Duffy recalled his first official boxing specific training session and said the intensity and attention to detail was a great amount to take in but stuck it out. The UFC lightweight also stated that “the type of fitness is very different. We obviously cover some of that in MMA, but there’s a level of comfort you have to get to,” Duffy said.

Duffy stated that McGregor will have to increase his punching output and will have to even tighten up on his precision, which he is already known for, which makes total sense as Floyd Mayweather is known for his defensive prowess.

“That is something that will take some getting used to because it’s a totally different ballgame,” Duffy said. “Conor is not going to be able to put pop on every shot and won’t be able to look at the leg to the neck as a target area.

“The gaps you’re looking for are much smaller. That’s what I learned in boxing – how to spot and open gaps, and to pace myself while doing that. It’s just one of those differences that people take for granted.”

Duffy says that McGregor’s unorthodox style could surely be something Mayweather may have some trouble with.

“Conor is going to have to catch him. With anyone you fight, they have two arms and two legs, so they can always be dropped or stopped.”

Although Duffy suggests Floyd Mayweather is only human, it will be no easy task for the UFC lightweight champion who will be stepping into the boxing ring.

“Conor has some sting on his shot but it’s different with smaller gloves, and obviously, Floyd’s defense is impeccable. Floyd is used to seeing these shots coming, and this is his battleground.”