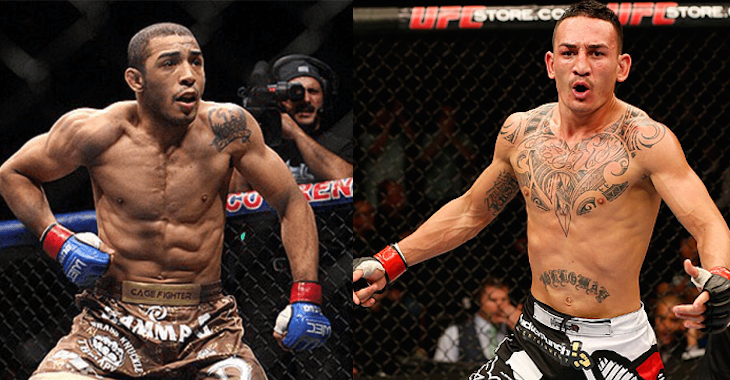 Aldo, of course, wanted the fight with McGregor for his shot at revenge after losing to his rival at UFC 194. At the very least, Aldo wanted McGregor stripped of the featherweight title with the bout against Alvarez being his third fight outside of the featherweight division with no title defenses made since snatching the belt from him in December of 2015.

“What means is money in the pocket, and that’s what I’m thinking about,” Aldo said in a report by MMA Fighting’s Guilherme Cruz. “That’s why I said ‘f*ck Holloway,’ who won eight in a row.”

Max Holloway has actually won nine fights in a row in the featherweight division and is still looking to get a chance to fight for a UFC title.

“Some people win 10, 15, and don’t fight for the belt,” Aldo continued. “So, who is he to say anything? So I wanted Pettis because that would be a way bigger fight. Everybody wanted to watch this fight when we were supposed to fight in Brazil. You have to think about money first, it’s business these days. First the pocket, then something else. “If I continue in the sport, I make it clear that I want to see money. That’s what it’s about. You can’t be a correct fighter. The right is wrong today. You don’t have to be the good guy and do what they want, that’s considered wrong today. The right is to spit at someone’s face, do cocaine or smoke weed, throw water at others, call people names, don’t show up at press conferences. That’s the right today, and that’s what Brazilian athletes have to do.”

In terms of numbers and pay-per-view buys, which he says is all the UFC is concerned about, Aldo questions who really draws a big audience.

As far as the legacy that he leaves behind if he truly never fights again, Aldo is more than satisfied with what he has accomplished throughout his career and puts himself up there with the best to have ever competed.

“In the entire promotion’s (history)? For sure,” said Aldo. “Of course, people will be partial, but I put myself among the best in history. When I said back then I was the best fighter people criticized me a lot, and I say it again. To me, brother, I’m the best.”

“(I hope to be remembered as) an excellent athlete, an excellent fighter. For everything I’ve done in there, always giving my best. And for being the champion I always was,” Aldo stated. “I entered (the UFC) as ‘Scarface’ and left as people’s champion. That makes me proud. I like doing what I always did. I never changed my head because I was the champion. I want to leave as the guy that became champion and continued being the same person.”