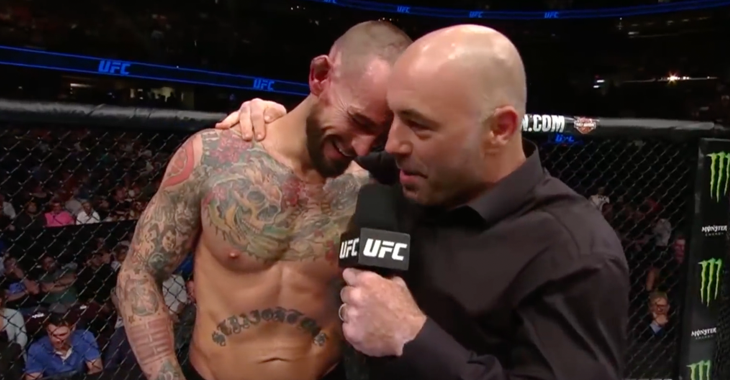 Earlier this year, on the main card of UFC 203, WWE star CM Punk made his long-awaited debut in the UFC’s Octagon. He made this debut against dangerous 24-year-old prospect Mickey Gall.

This debut would go disastrously for Punk, who was promptly taken down by his young foe, only to be softened up with ground-and-pound, and submitted with a rear-naked choke before the clock hit 3 minutes. Given that he began his journey to the UFC with precisely zero real martial arts experience, this was not especially surprising. What was surprising was the heart that Punk showed in the cage. Though he was absolutely rag-dolled on the mat, and had no answer for Gall’s stream of ground strikes, he hung in there with the grittiness and poise of a far more experienced fighter. This showcase of lion-heartedness convinced many fans that the former pro wrestler deserved another shot in the UFC. When it was revealed just how much his superstardom helped UFC 203’s pay-per-view sales, his getting a second opportunity in the Octagon seemed like an even more reasonable possibility.

On a recent episode of FS1’s UFC Tonight, however, UFC President Dana White asserted that Punk would probably not be offered this opportunity.

“Is CM Punk going to be a guy who is going to stay in the UFC and continue to fight? Probably not,” White said on the show. “But he wanted to try it. I like the guy. I respect the guy. He wanted to fight in the UFC. He wanted to do it. He trained for two years, and he did it.” On the show, White also touched on the recently announced MMA aspirations of former Dallas Cowboy Greg Hardy. Apparently, he hasn’t yet had the chance to give the former football player’s MMA career much thought.

“There’s been situations like Brock Lesnar who came in and wanted to do it, and obviously that one turned out well,” White explained. “Then obviously we had the CM Punk thing. It just depends. I wouldn’t say that I’m looking for retired NFL players for pay-per-view or anything like that. I just don’t know what the real interest is in seeing some of these guys fights or even if it makes sense.”

Are you interested in seeing CM Punk fight in the UFC again? How about Greg Hardy? Sound off, PENN nation!