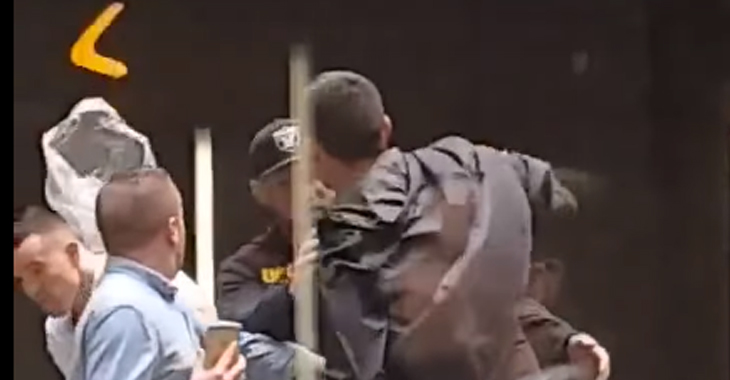 Unless you’re living under an MMA rock, you should know by now that Fabricio Werdum hit Colby Covington in the face with a boomerang while in Sydney, Australia promoting the UFC card that goes down this weekend. Covington went on Instagram live right as it ended and went off on the heavyweight fighter for attacking him and has since pressed charges. With some sort of fighter beef sixth sense, his teammate Jorge Masvidal warned Covington that a confrontation might happen.

“I don’t know. It’s been fun. I think [Colby Covington]’s having fun too. You know, he’s making the best out of it as always. He’s crazy, man. Nah, [he’s not going too far]. Colby’s, Colby. That’s my partner. He’s going to do whatever he wants. He’s not going to definitely listen to me. He’s crazy, man. I actually told him though, right before he left because he was scheduled to do some interviews with the UFC. And I told him, I go, ‘You should watch out. If [Fabrico Werdum] said that, he probably would try to do something to you, put his hands on you.’ It’s crazy that it happened shortly after. You know, this was like 20 minutes before that happened. I told him, I was like, ‘Hey, be ready just in case something happens.'”

The Australian TV report on the Fabricio Werdum-Colby Covington boomerang attack is as amazing as you’d expect. pic.twitter.com/1wMDGfMo6Y

“I’ve never seen a boomerang get involved in the action. This was my introduction to Australian street fights. That’s really crazy. It’s crazy because I don’t want to start more bad press for my sport and get fines and things, so in a way I’m glad I’m not there. I don’t want to be apart of the chaos. I’m not going to run form it. If there’s a fight and somebody’s picking it with me, that’s what I love to do so f-ck it, I might have to do a free one here and there but I don’t want to. I don’t want to get in trouble. I don’t want no extra negative media on me. Colby’s, Colby man. He’s on a different vibe. He’s got different plans, man. I don’t tell him what to do when it comes to that type of stuff. He’ll listen to me, but at the end of the day, that dude’s crazy man. He’s going to do what he wants to do.” — Jorge Masvidal speaking to Submission Radio.

When a guy like Jorge Masvidal — who has been featured street fighting on old Kimbo Slice videos, — tells you that you’re crazy, then that’s a pretty big endorsement. They always say that no press is bad press, if that is the case then Colby Covington is doing great. He doesn’t have a fight lined up and he’s one of the people that everyone is talking about. Although, don’t let his antics overshadow that he did beat Demian Maia, which is a huge accomplishment for anyone at welterweight.