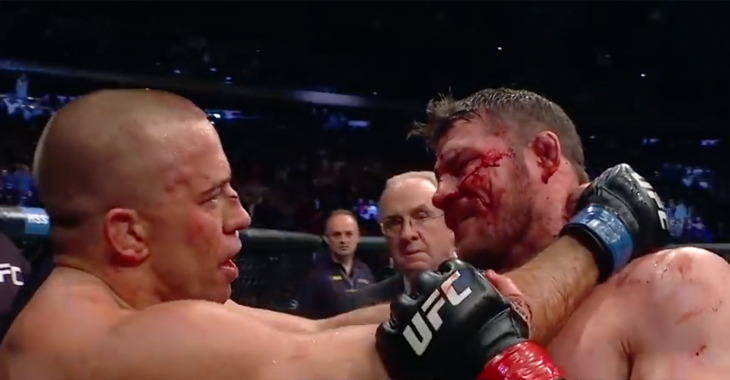 With as crazy as the MMA world has been lately, it’s almost easy to start to forget the embarrassment of riches that UFC 217 gave us. Perched atop the hugely successful card, Georges St-Pierre made his return to the Octagon for the first time in four years and was able to take the UFC middleweight title from Michael Bisping. In a recent episode of Jon Anik and Kenny Florian’s podcast, UFC veteran and former commentator Brian Stann talked about what an achievement St-Pierre pulled off, especially with how severe his anxiety gets before fights.

“That’s a tremendous layoff. There is a huge difference — I don’t care what kind of shape you get into in the gym, in training camp. I don’t care if you measure everything, your resting heart rate, I don’t care — it’s all different when you’re actually in that Octagon in fight night. The bright lights, the anxiety, the nerves — GSP, he suffers from some of the worst anxiety I’ve ever seen in this sport, which makes what he did even more special. I thought he was fantastic, I thought he was technically very good. He did obviously slow down, but it was expected. It looked like Michael Bisping was taking over that fight, but GSP found a way to do it. It’s not like he did anything that was completely different from what we’ve seen before in his career, but the fact that he was able to come and fight at that level, after 4 years on the bench is absolutely outstanding to me.”

“I’ve long thought he was the best to ever do it. I’ve transitioned recently to Demetrious Johnson. Now, with GSP coming back and doing that? I’ve got to say that GSP is the best ever. When you look at who he’s beaten, how long he has been dominant, and to come back now at this age, four years on the bench, and win a belt a weight class above? That’s a big jump. That’s a 15-pound difference. This isn’t boxing, where the weight class is 5lbs higher. He went from fighting guys walking around 190, 185, to now fighting a guy who walks around at 225 in Michael Bisping. That’s a tremendous jump.”— Brian Stann said on the Anik and Florian Podcast.

All of this has been well-documented and confirmed leading all the way up to St-Pierre’s UFC 217 return. Georges St-Pierre went on record talking about the utter claustrophobia he suffered from back when he was in his prime. It was the anxiety that lead him to walk away from the sport. Now that he’s back and returned in such a huge way, he has the luxury of being able to sit and think and choose carefully what he would like to do next. Despite all this, Stann said he doesn’t want to see St-Pierre fight again, citing that he has nothing left to prove in this sport.