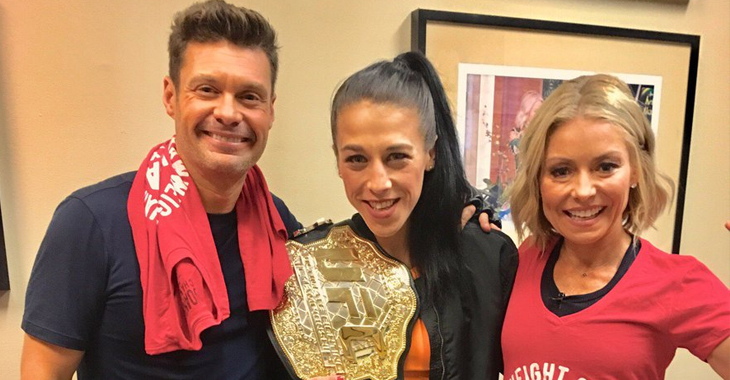 Sprinting through UFC 217’s last promotional leg, Joanna Jedrzejczyk has been everywhere. There has been three or four press conferences total and countless media duties. Even though we’re a single day away from the fights at Madison Square Garden, the gears are still spinning. The UFC strawweight champion will be on a show with rapper Action Bronson later today, and this morning she appeared on Live with Kelly Ripa and Ryan Seacrest.

This hearkens back to the days where Ronda Rousey was judo tossing every morning, afternoon, or night show host nearly every week. Except now, it’s Joanna Jedrzejczyk. The champ has been arguably the most intimidating in the lead up to fighting Rose Namajunas than she’s ever been. Seeing her on a wholesome morning show is a welcome change and a startling contrast to her fight week persona. Of course, we get the obligatory workout lesson with the co-hosts which results in Kelly Ripa and Ryan Seacrest mumbling to each other while throwing elbows. We also get an inside look on Jedrzejczyk’s ‘smell it, smell it, taste it’ secret to a kicking combination.  However, Joanna Jedrzejczyk struggling to pronounce ‘Fort Lauderdale’ on air is charming and probably steals the show. She also talks about watching cartoons and, of course, chokes Ryan Seacrest.

The full episode is down below and Joanna Jedrzejczyk defends her title against Rose Namjunas tomorrow night at UFC 217.