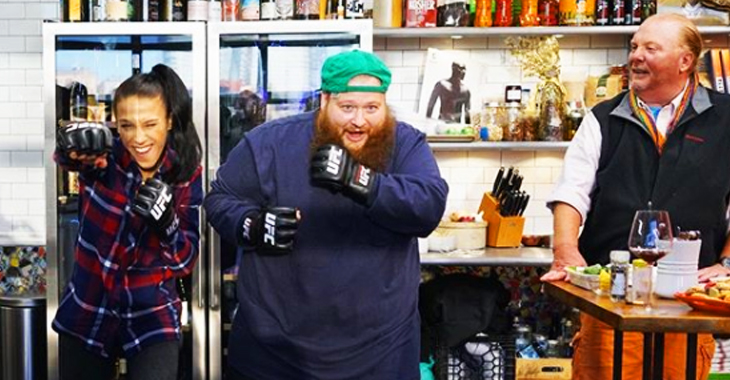 No, that’s not Roy Nelson walking around in a Carhartt shirt and backwards cap, that’s rapper/chef/mogul ACtion Bronson. Before UFC 217, Joanna Jedrzejczyk dropped by VICE and created a partnership of massive proportions. While Jedrzejczyk has been dominating in the UFC, rapper Bronson has been taking over the airwaves. His nomadic culinary adventures that span across multiple continents and outlets have culminated in his latest venture: The Untitled Action Bronson Show. His new VICELAND creation serves as a homebase where he takes a break from doing cannonballs off of ships into the Adriatic Sea, to invite his favorite people to take part in an unorganized explosion of food and entertainment.

I had so much fun with @bambambaklava at The Untitled Show today Watch it on Friday on @viceland
#thestrawwei… https://t.co/DBPxD1Yced pic.twitter.com/09jG1tHHwO

Instead of enjoying an extravagant octopus pasta cooked by Mario Batali, Jedrzejczyk had to eat her salmon salad with some electrolyte-enriched alkaline water. She didn’t let her upcoming bout with Rose Namajunas stop her from sparring a little with Action Bronson and leaping on his back to sink in a choke though. Meanwhile, the burly and bearded auteur received the honor of carrying the UFC strawweight title over his shoulder while trying to not smoke marijuana around her.

@bambambaklava couldn’t stop jabbing everything he saw after lessons with @joannajedrzejczyk. Tonight at 11:30p on @viceland.

It was a legendary cultural exchange, which could be the description of any episode that Action Bronson puts out. Joanna Jedrzejczyk attempts to teach Bronson a flying knee, while he gives her pointers on illegal headbutts and spleen shots. There’s a spoken word poet, copious amounts of wine, and food you could only dream about eating. There’s no script, no overbearing producer, just an occasional piece of paper with a note that gets held up so Bronson doesn’t descend too far into chaos. Adding Jedrzejczyk to be mix is almost as big of a treat as the Puerto Rican pork shoulder.