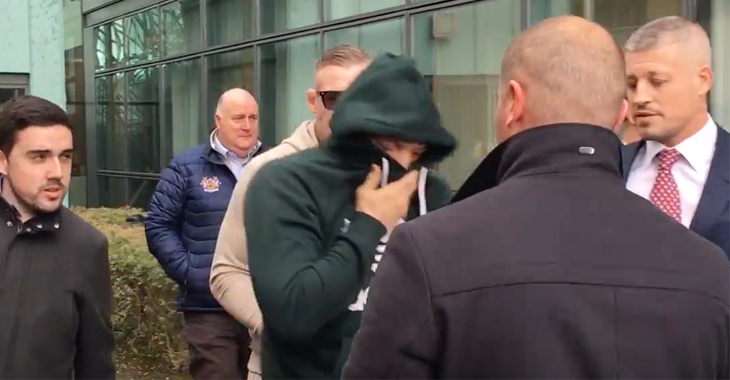 Conor McGregor had a court date scheduled today at the Blanchardstown District Court for a speeding violation from March of last year, according to mirror.co.uk. This was the third time McGregor failed to show up on time for his hearing.

“I’m getting nothing but fingers from Mr. McGregor. If he’s making a case he has to be here,” Walsh told Kenny. “This is absolute disrespect to the court. I am very annoyed with Mr. McGregor.” Walsh added, “You can tell him about my ire.”

Kenny who stated he was unaware of McGregor’s location or why he was not there in court at the time eventually got a hold of the UFC superstar, who made his way to the courtroom sporting an Adidas sweatsuit and sneakers. “I got the fixed charge notice and attempted to pay it,” McGregor told the judge. “It didn’t pay and that’s it.”

Walsh replied: “That’s not it.”

Walsh ordered the brash superstar to slow down and “take cognisance of other people using the road”.

“I apologize and I’ll pay the fine,” McGregor replied.

“The Notorious” was fined £350 (around $475) and funnily enough was given an installment plan with two months to pay the fine off.

On the topic of money, Judge Walsh questioned McGregor’s earnings.

“I have to ask you the question… how much to you earn? Please don’t tell me you earn more than €110 million in a day?” The UFC lightweight champion was then seen exiting the courthouse and sped off with his entourage seeming to taunt his rumored enemies saying, “Come and get me!”

Do you think all the fame and wealth has gotten to be too much for Conor McGregor? Or is he just living up to his “Notorious” name? Let’s discuss this in the comment section.