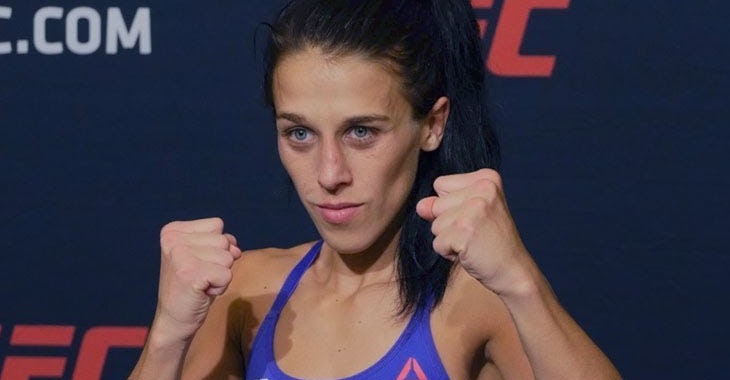 UFC 223 will play host to the rematch of the most shocking upset of 2017. At UFC 217, the 25-year-old, “Thug” Rose Namajunas dispatched of the then reigning champion, Joanna Jedrzejczyk effortlessly to earn a first-round knockout victory. The fight was in November and we’ve since learned from the former Strawweight queen, Joanna that this was one of if not the worst weight cut of her career. She has also been one of the bigger 115 lbers and had fought previously at 125 lbs in her career before coming to the UFC. But when it comes to her toughest time making her division’s limit, the fight with Rose took the cake as she described it as a “miracle” that she made weight.

“Man, I felt so bad, I had to cut 15 pounds in 14 hours. I did it in 14 hours. I think Perfecting Athletes couldn’t believe that I did that. I start my weight cut at 5 pm on Thursday and I was on weight five minutes before 11 am on Friday, so it was a miracle. I was praying to God for this miracle. And it happened. I took this mentally. I was crying, I was so weak but I believed it. I said to one of the Perfecting Athletes team, ‘Hey, it’s a shame for a champion to not make her weight’, and then I made it — a thing I couldn’t believe.”

After the weigh-ins, I had only fluids and I went to bed because I took just two 15-minute naps during the weight cut. The thing is, my legs got numb after I woke up. I said to my doctor, ‘Hey, my legs are numb’, and she said, ‘nothing to worry about, we’re going to hydrate you more’ and ‘you’re going to be fine’. But the next day, I felt the same and thought the most crazy things. I took the fight mentally. I wanted to go into the fight and push away all of the worries. Like I said, I could’ve gone to the doctor and got an IV, but I was worried that they were going to cancel my fight. I couldn’t do that to my fans. I’m a real warrior. And if people want to believe they can believe. If not, I will prove them wrong. I’m still the champion.

They [Perfecting Athletes] were like family, you know. I trusted them so much and I paid the ultimate cost for someone’s mistake,” she said. “They agreed with me. We sat and talked on Monday after the fight and they agreed with me that they made a mistake, but I paid the ultimate price. I was light in this camp. I was like 127 on the Friday and Saturday a week before the fight. We were planning to get me to 125 by Tuesday, but my weight went up on Sunday to 130 and I couldn’t drop the weight for three or four days. I did everything that I could, and it’s their mistake. I started my weight cut with the limit at 130, so it was almost impossible to make that weight.”

Rose Namajunas was the very first person to blemish the flawless career of Joanna Jedrzejczyk. She was 14-0 with five title defenses to her name and a win over Rose would have made it so that she was tied with Ronda Rousey for most UFC title defenses for a female fighter.

Joanna and Rose will rematch in the co-main event of UFC 223 in Brooklyn, New York on April 7th. That event is headlined by the title fight between Tony Ferguson and Khabib Nurmagomedov.