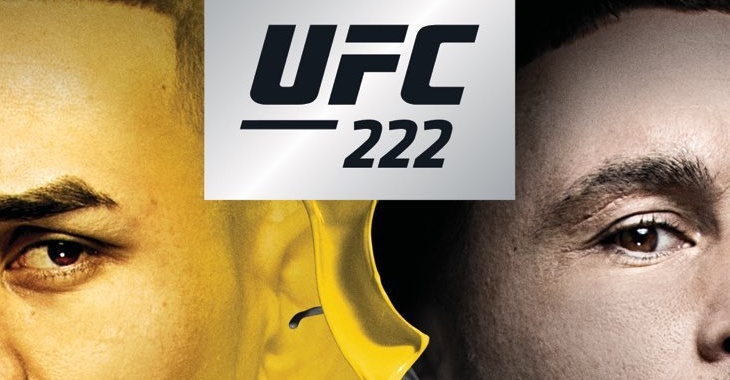 UFC 222 will be 2018’s first Las Vegas event of the year and it’s headlined by a big title fight that we thought we would get in 2017. Featherweight champion, Max Holloway will look to defend his title for the second time when he takes on former Lightweight champion, Frankie Edgar. The two were expected to fight at UFC 218 in Detroit, Michigan before Edgar suffered an orbital injury that pulled him from his third UFC Featherweight title shot. But now he’s all healed up and ready to go.

Today the UFC released the official poster for the event. Check it out: The most notable thing about this poster is that it confirms that the co-main event will be the Heavyweight showdown between longtime UFC veterans, Stefan Struve and Andrei Arlovski. The rest of the card features plenty of good action:

Max Holloway has quickly become one of the best fighters in the world and with back to back TKO victories over Jose Aldo, there’s no more denying it. One win over Aldo alone is impressive, something that Edgar failed to achieve on two separate occasions. Now that Aldo isn’t the champion anymore, it gives Edgar yet another chance to achieve his goal of becoming a champion in two different divisions.

Edgar became the UFC Lightweight champion back in 2010 after he defeated BJ Penn by unanimous decision. Penn would get an immediate rematch only to lose more decisively that time. Edgar would have two more epic fights with Gray Maynard after that before dropping the title to former WEC champ, Benson Henderson, thus prompting his move down to the 145 lb weight class.