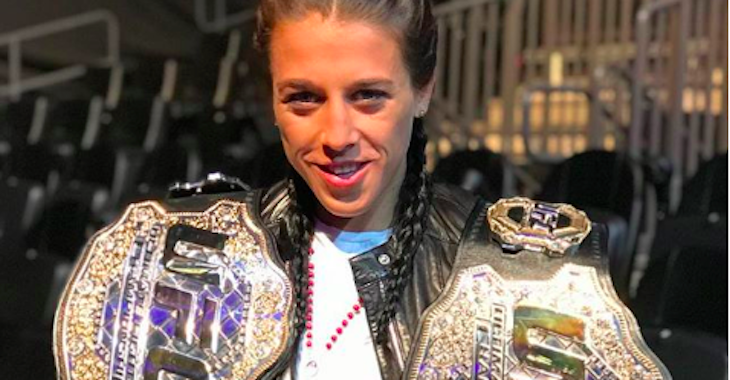 This weekend, Joanna Jedrzejczyk will once again strut into Madison Square Garden just under the co-main event to defend her UFC strawweight title. Rose Namajunas stands a violent and crafty challenger who is not intimidated, but consensus is she’ll be just another person who falls short against her overwhelming dominance. It’s a performance so consistent, that she’s beginning to have familiar questions aimed at her, the same questions given to Demetrious Johnson: When are you moving up in weight for a new challenge? Joanna Jedrzejczyk recognizes the challenge and it’s something she thinks about.

“Definitely the flyweight division is something I think about, but if I move up, it’s going to be the biggest challenge in my fighting career. I will see. […] I make my dreams and goals come true. When I seem backed up and I’m tired, I think of my dreams and goal. My dream and goal is to be undefeated. My dream right now is to tie Ronday Rousey’s record, break the record of seven title [defenses] in the UFC for a female fighter, retire undefeated in the future and go for the second belt.”

“It is the record, but it’s all about my personal record. I break records everyday. I break barriers everyday, my personal and my private barriers because it’s not easy. If you want to stay a champion you can’t only have this hype. There is a time to do media, to be on the covers of magazines, on the TV but then there is a time for hard work. You must be like the butcher and work your ass [off]. There is no time for make up and [magazine] covers and photoshoots. […] Even if I move flyweight next year, for sure I will defend my strawweight title.” — Joanna Jedrzejczyk told the Fight Society podcast.

The UFC will crown their inaugural women’s flyweight champion before this year ends, if Joanna Jedrzejczyk wins this Saturday, she’ll just need one more title defense at strawweight to beat Ronda Rousey’s defense record. By then, hopefully the flyweight division will have had a little time to establish itself and it’d be the perfect time for Jedrzejczyk to challenge for two titles. Either way, no matter which division she decides to fight in or both, Jedrzejczyk is must-watch every time.