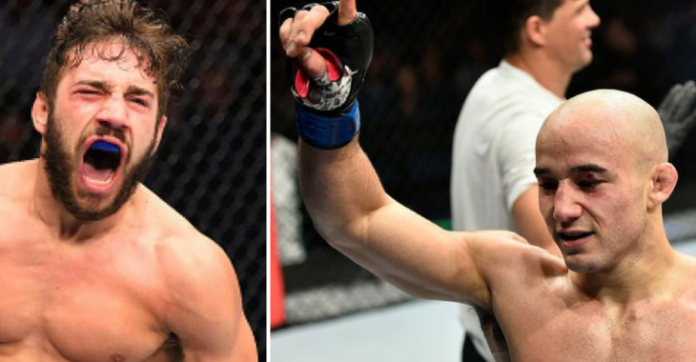 After multiple back and forths on social media and attempts to set up a fight between each other, it looks like there’s a much more solid chance for it to happen now. MMAFighting has reported that UFC Fight Night 131 in Utica, New York will be headlined by a top 5 bantamweight showdown between Jimmie Rivera and Marlon Moraes. The event takes place on June 1st.

The talk of these two world class 135-pound competitors really heated up after former champion, Dominick Cruz was injured out of his bout with Rivera for UFC 219. Rivera found himself with several suitors to step in. The UFC decided to go with John Lineker who ended up having to pull out as well due to a tooth infection just about a week before fight night.

Moraes would then jump in as the front runner asking for the fight as he was trying to get it even before Lineker got the call. Both men said they wanted to fight each other and had agreed but couldn’t come to an agreement on the weight. Rivera stated he was open to fighting at as high as the featherweight limit of 145-pounds.

It’s been a rather longtime since Rivera last tasted defeat. He is 21-1 in his MMA career and his first and only loss came in just his second fight. Moraes isn’t too used to losing either. He’s 20-5-1 but is 15-1 in his last sixteen and could arguably be 16-0(that loss came to fellow top 135er, Raphael Assuncao). Moraes is most commonly known for being the dominant five time defending World Series of Fighting champion.

In the other matchup announced for UFC Utica, we have a clash of top flyweights. Also reported by MMAFighting, it will be The Ultimate Fighter season 26 finalist, Sijara Eubanks vs Lauren Murphy.

Eubanks was supposed to be vying for the inaugural UFC flyweight championship against the now champion, Nicco Montano but was forced out of the fight when she was hospititalized after weight cutting complications. Eubanks had only fought at 125-pounds prior to TUF and struggled with the cut during the season but was still able to win her way to the finals.

The big question after missing weight was whether or not the UFC would still gift her her title shot that she had initially earned. It appears that we have that answer…

The former Invicta FC bantamweight champion, Lauren Murphy was eliminated in her first fight on TUF 26 by the champion, Montano. She has since defeated the former #1 flyweight in the world and inaugural Invicta flyweight champion, Barb Honchak by a close split decision.