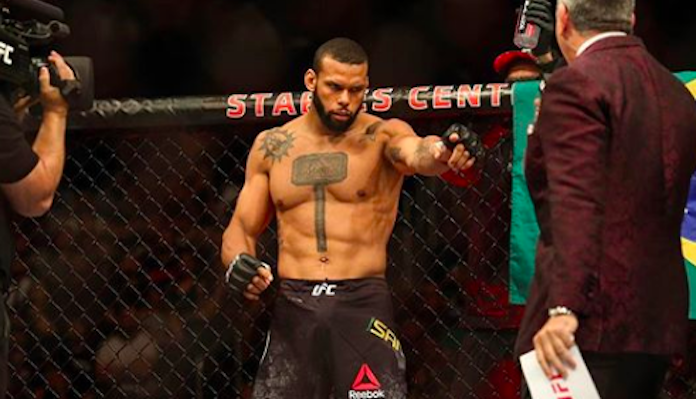 Just days after it was announced that the UFC’s September 22 return to Sao Paulo, Brazil would be headlined by a light heavyweight bout between Jimi Manuwa and Glover Teixeira, Teixeira was forced out of the fight an injury. From there, the UFC began a frantic search for a replacement opponent for Manuwa. One of the options in this regard is middleweight knockout artist Thiago Santos, who has recently been flirting with a move up to Manuwa’s 205-pound light heavyweight home.

According to a report from MMA Brasil’s Tarso Doria, however, Manuwa turned down this prospective bout with Thiago Santos.

A new Tweet from Thiago Santos himself seems to validate this report. In this Tweet, the Brazilian called out Jimi Manuwa for turning down the fight, implying that Manuwa is worried about sustaining a third loss in a row.

“ I offered to fight Manuwa in Sao Paulo but he declined. I get it! He is coming off 2 losses doesnt need a 3rd!!!! @ufc @ufc_brasil @canalCombate

Does a fight between Thiago Santos and Jimi Manuwa interest you? Who do you think would win?