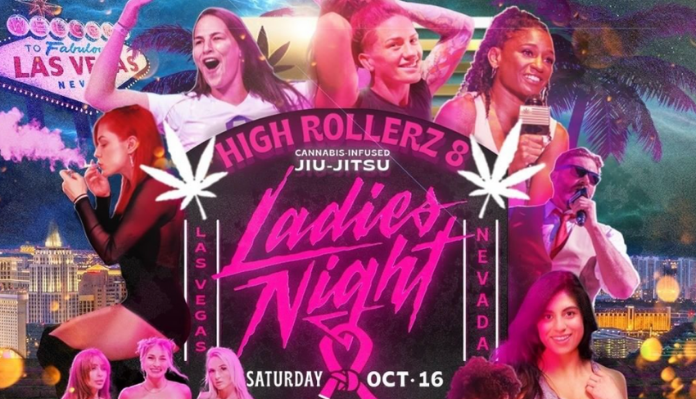 Coming hot on the heels of its ‘Cops vs Stonerz’ show in September, High Rollerz is putting on a special ladies night with all proceeds going towards breast cancer.

The show will take place on October 16th with fan favorite Renato Leranja on the mic alongside UFC strawweight Angela Hill while Fight Circus CEO, Jon Nutt will be on MC duties.

The showpiece for the event will be a Female Super Champ Flyweight Round Robin tournament of 6 minute matches between Jessica Eye, Gillian Robertson and Gina Mazany.

Describing itself as ‘The Dopest Martial Arts Tournament in the World (Cannabis-Infused Jiu Jitsu,) High Rollerz has put together some intriguing and at times unconventional matches since its inception in 2018.

The first-ever High Rollerz tournament followed the Eddie Bravo Invitational rules but with one twist: competitors were encouraged to smoke weed before and during the event. the show was also attended by Nick Diaz who has become something of a cult hero for smoking weed and doing martial arts. Needless to say, the smoking element has been a running theme ever since. The Cops vs Stonerz show featured Diaz’s long-time friend and former UFC fighter Jake Shields.

Currently competing in the PFL, Shields followed up his win over Diego Sanchez at High Rollerz 4 by defending his belt against Mitch Aguiar. Afterwards, he proudly posted a video of himself “smoking out with a cop/navy seal.” The event was also attended by UFC icons Tyron Woodley and Jorge Masvidal who featured in a viral video involving a giant smoking device.

‘Ladies Night’ will be a second outing at High Rollerz for Jessica Eye. ‘Evil’ will be looking to improve on her debut at High Rollerz 4 where she lost to Valerie Wong. The former UFC flyweight title challenger has endured a tough run of form over the last couple of years having suffered losses to Cynthia Calvillo, Joanna Calderwood and Jennifer Maia in her last three fights.

Robertson will be looking to sharpen her tools ahead of her upcoming UFC bout against Priscila Cachoeira at UFC 269. Meanwhile, Mazany’s last outing was a loss to Cachoeira – so she’ll be looking to get back in the winning habit at High Rollerz.

So far the line-up also includes: