Maycee Barber will look to extend her win streak to three in a row at International Fight Week.

Multiple sources informed BJPENN.com on Thursday that Barber has been booked to face Jessica Eye at UFC 276 on July 2 in Las Vegas. Eye was originally supposed to fight Casey O’Neill at the event, but on Thursday Casey announced she was out of the bout due to a torn ACL.

Maycee Barber (10-2) picked up a decision win over Montana De La Rosa last Saturday at UFC Vegas 52. It was the second win in a row for ‘The Future’, as she previously edged out a win over Miranda Maverick last July. The win over Maverick snapped her two-fight losing streak after dropping back-to-back decisions to Alexa Grasso and Roxanne Modafferi. 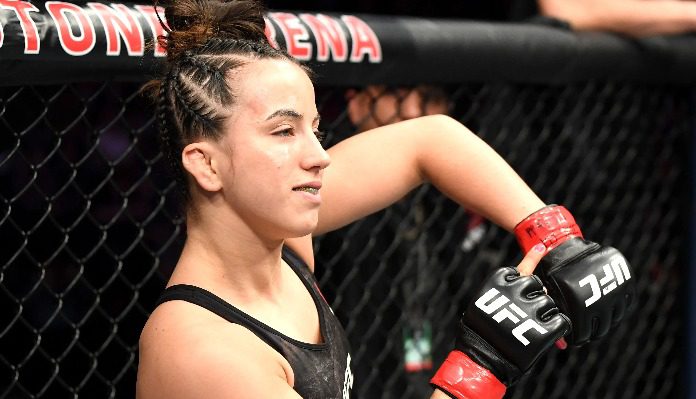 Barber started out her UFC career 3-0 with three TKO win over Hannah Cifers, JJ Aldrich, and Gillian Robertson before the setbacks. She’s currently ranked 14th at flyweight and called out Eye following her win over Maverick.

Jessica Eye (15-10) is on a three-fight losing streak and hasn’t fought since UFC 264 when she lost a decision to Jennifer Maia. Prior to that, she suffered a decision loss to Joanne Wood at UFC 257 and dropped a decision to Cynthia Calvillo in June of 2020 which served as the main event of a Fight Night card.

Eye is currently 12th and her last win was a decision victory over Vivane Araujo at UFC 245 after losing by KO to Valentina Shevchenko for the flyweight title. ‘Evil’ also holds notable wins over Katlyn Chookagian, Leslie Smith, and Jessica-Rose Clark.

With the addition of Maycee Barber vs. Jessica Eye, UFC 276 is as follows:

Who do you think will win at UFC 276, Maycee Barber or Jessica Eye?

This article appeared first on BJPENN.COM
Previous articleJake Paul and Eddie Hean make $1 million bet on Amanda Serrano-Katie Taylor fight
Next articleJoanna Jedrzejczyk re-signs with UFC ahead of Weili Zhang rematch: “I want to retire in the UFC”
© Newspaper WordPress Theme by TagDiv