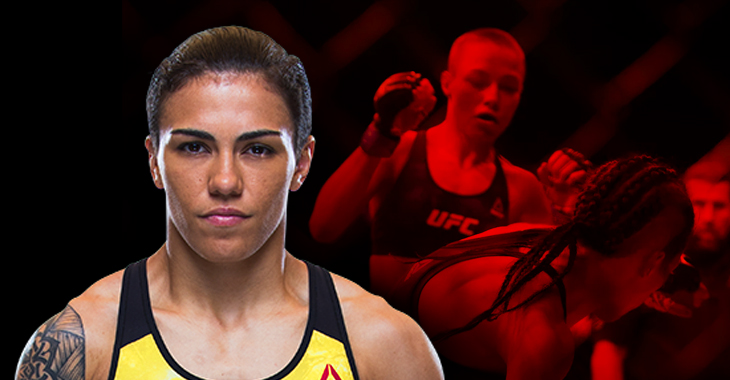 Fans and media weren’t the only ones shocked and celebrating Rose Namajunas putting on her incredible, belt-stealing performance against Joanna Jedrzejczyk at UFC 217. Former title challenger Jessica Andrade compared her division’s reaction to a World Cup win. In a recent interview, she broke down how Namajunas did the unthinkable and wasted no time at all calling out the new champion. Things just got really interesting at women’s strawweight.

“[Joanna Jedrzejczyk] definitely underestimated [Rose] Namajunas. She got in there as it was just another fight, that it would be easy. She was more aggressive, but she forgot that Namajunas is taller than her previous opponents, like me and Claudia [Gadelha], and has a bigger reach. That’s how Namajunas found the opening. Namajunas trained for that and did a great job. I was rooting for Namajunas to win. When I saw her going down the first time, I said ‘damn, this will be good.’ When Namajunas dropped her the second time and knocked her out, I said ‘I can’t believe it.’ It was like a World Cup game, you know? Everybody screaming and celebrating because it’s easier now for the division to move and we have another opportunity to fight for the belt again.”

“I think it’s easier with Rose as the champion because you have new match-ups for the belt. I don’t believe the UFC will give Joanna a rematch because it makes no sense. She lost by knockout in the first round. [Jose] Aldo and Ronda [Rousey] lost like that and there was no rematch. I don’t think the UFC will make it. [Namajunas] is a tough opponent, that’s why she beat the champion, but I think that finding the timing and distance, I can get in and knock her out. I can’t let her do what Joanna did to me. I have to find the best timing and distance. If the fight goes to the ground, I can submit her as well. Namajunas has a good ground game, so I can’t let her take my back or get on top.”

It’s not just the belt she wants though, she wants to redeem herself against Joanna Jedrzejczyk. Possibly winning the belt against Rose Namajunas and then going on to defend against Jedrzejczyk would be huge. She wasn’t able to capture the title at UFC 211, but followed that up with a dominant performance with Claudia Gadelha that ended up being fight of the night. You have to think the plans are to have Namajunas fight Jedrzejczyk in a rematch, but if not, Jessica Andrade is making sure she’s next in line.

“I thought about this already and it will definitely happen if Joanna doesn’t move up to flyweight The UFC would definitely do this rematch. We would be in different roles, and I’d show her how a champion should behave. She was rude, aggressive, mad, and that’s not nice. I’ve met her before and she was more pleasant, nicer, helped people. She became a completely different person after she became champion.” — Jessica Andrade speaking to MMA Fighting.