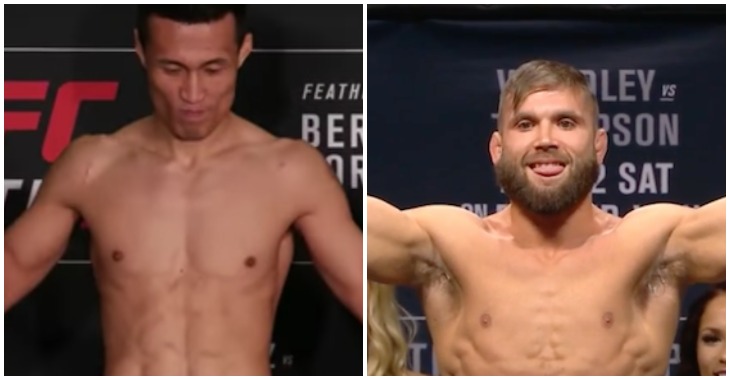 Jeremy Stephens is keen to channel Rick Grimes and do some zombie hunting. The brick fisted featherweight recently took to social media to campaign for a bout with Chan Sung Jung – better known as “The Korean Zombie.” Stephens hopes the UFC will put this fight together for the UFC’s planned April 15 debut in Kansas City, Missouri, which was first reported by CagePages.com.

Stephens’ inspiration for this callout, of course, is quite clear. Though the Korean Zombie has always been one of the most popular fighters in the UFC featherweight division, he returned from a hiatus of more than three years in the main event of the UFC’s Saturday night trip to Houston, Texas. In this comeback fight, the Korean Zombie coaxed a game Dennis Bermudez into a brawl, where he clubbed him with a blistering uppercut for a first-round knockout. Though many expected the Korean star to be affected by ring rust when he made his return to action, he ended up looking better than ever.

With this crushing knockout of Bermudez, the UFC’s undead superstar finally returned to the win column after a August, 2013 TKO loss to featherweight champ Jose Aldo, which marked a failed bid to capture the divisional crown. Prior to this loss, he was on a nice three-fight streak, having tapped Leonard Garcia with the only twister that’s ever occurred in the Octagon, scored one of the fastest KOs in UFC history against Mark Hominick, and submitted Dustin Poirier in one of the best fights ever.

Stephens, meanwhile, was last seen in action in November, when he gave up a decision to two-time featherweight title challenger Frankie Edgar. Prior to that loss, he scored a nice win over former bantamweight champion Renan Barao.

Would you be interested in a Jeremy Stephens vs. Korean Zombie fight? Sound off, PENN Nation!