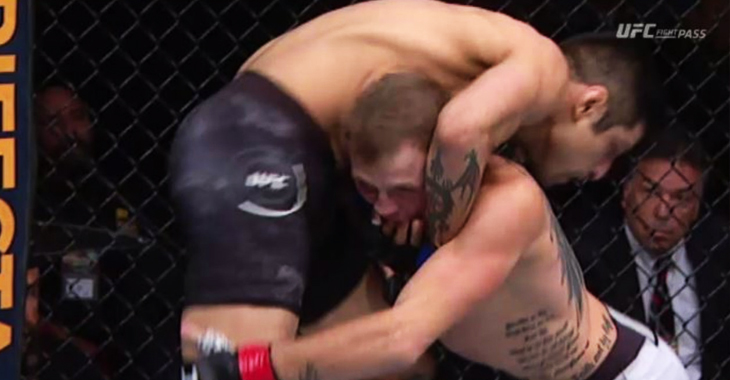 Saturday night in Fresno, California, something weird happened. For perhaps one of the first times in UFC history, a fight was paused and a point was deducted for … biting? While trying to take Gabriel Benitez down, it appeared that Jason Knight bite down on Benitez’s fingers. The fighter complained to the referee and he made his decision to take a point away. The only thing the internet was able to provide is a blurry screenshot, but Jason Knight himself admitted that it happened in a recent social media post. Although, he had a good reason.

Yea I accidentally bit the dude this weekend, u put your fingers in my mouth I’ll bite them too , a fish hook is not a takedown defense pic.twitter.com/QuuTzjcQXo

“[Jason Knight] bit my thumb, my finger. I tried to grab the chin, and he bit two times. In the fight, this happens. … No [I don’t think he’s dirty] because in this sport everything happens. It was a mistake. It’s just a sport. [I wanted to impress] not only Dana White, but everyone. Now everyone knows who is Gabriel Benitez. Next for me is a good vacation with my wife. That’s going to happen. On the schedule, I don’t have anything right now. But if the UFC gives me the opportunity, I will prove it.” — Gabriel Benitez speaking to MMA Junkie after the fight.

It’s definitely a strange scenario. Jason Knight’s arms were wrapped around Gabriel Benitez so he didn’t place the fighter’s fingers in his mouth. Unless Benitez intentionally was going to fish hook Knight, he also didn’t intend on putting his digits inside Knight either. It looks like neither fighter holds any residual animosity towards one another, aside from Jason Knight’s critique of Benitez’s takedown defense. However, we’ll not soon forget one of the most bizarre point deductions in recent memory.