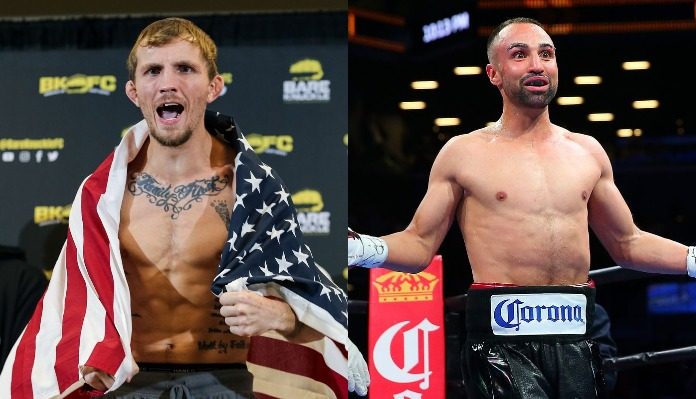 Jason Knight picked up his first win in bare-knuckle boxing and now he is looking to strap on the gloves and fight Paulie Malignaggi.

Knight is coming off of a fifth-round TKO win over Artem Lobov at Bare Knuckle Fighting Championship 9 on Saturday. Malignaggi, meanwhile, also had a fight in BKFC where he lost by decision to Lobov. He then made it clear he was done with the sport. Yet, “Hick Diaz” is hoping the two can enter the boxing ring for a bout.

“@paulmalignaggi I know you don’t want to fight BKFC again but what would u say to a boxing fight?? I have no prior boxing matches but I bet I can school you at your won game!!,” Jason Knight wrote in an Instagram post.

Malignaggi was quick to respond where he seemed open to the two having a boxing match down the line.

“Well done Jason, solid adjustments Saturday night. I have not yet seen the fight but saw higlights and your sense of timing and disciplined game plan was very impressive to notice. You def caught onto a few tactics from my fight and fought smarter,” Malignaggi responded. “I wish my hands could survive the impact again cause truthfully I enjoyed the experience and wouldn’t have minded facing you after your display. However I have a career history of hand problems and I cannot keep risking them or I’m gonna wind up with permanent damage to them.

“If there are interested parties that are willing to put up enough money I am not against regular boxing though where some protection for my hands is there,” he continued. “Maybe David can do a card where you and I glove up but instead of a ring we can fight in the bkfc squared circle with our undercard consisting of bare knuckle fights. Again its dependant on the compensation. After all, we are prizefighters. Once again though, well done and congrats on an impressive display.”

The two then agreed to the bout in follow up comments where they seemingly have a ton of respect for each other and are willing to make this fight a possibility.

“@paulmalignaggi thanks brother, I’d love to make this happen… and it’s not a disrespect thing either, I’d just like the test against a real boxer and see where I stand skill wise,” Knight added.

“@jtkthekid no disrespect taken at all. You are a competitor and I respect that. If someone compensates us well for the fight I can def consider it and we can go from there,” Malignaggi concluded. “This forum is public so people can see the interest in making this possibility a reality is there from us both. I have also given a possible way we can do it with bkfc still promoting it if they have this interest.”

Whether or not BKFC will promote a real boxing fight, or if Jason Knight and Paulie Malignaggi will ever box each other is to be seen.

Would you like to see Jason Knight vs. Paulie Malignaggi in boxing? And, if it happens, who do you think would win? Sound off in the comment section, PENN Nation!