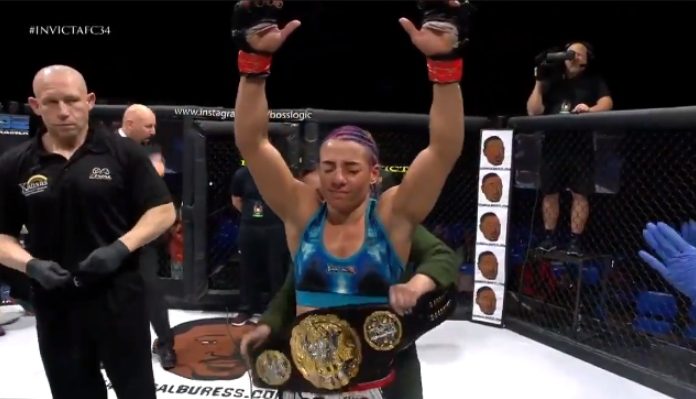 On Friday night, live from the Memorial Hall in Kansas City, Kansas, Invicta FC held their first event of 2019 with Invicta FC 34. Which was truly a divisional showcase for the flyweights.

Leading up to the vacant title bout, we got the semi-finals of the No. 1 contender tournament.

Kicking off that action was the duo of the hot prospect Miranda Maverick and the veteran, The Ultimate Fighter 26 alum DeAnna Bennett.

The first round was a technical battle of leg kicks and punches on the feet that majorly saw Bennett getting the better of as she dictated the pace. A takedown would eventually be found by Bennett and the fight would stay on the ground from that point until the end of the round.

In the second frame, it was a bit more of the same to start things out until they got in close to jockey for clinch control.

Maverick was able to spin the momentum and take Bennett down in a reverse crucifix briefly. On the get-up, Bennett was able to work and reposition to end up getting Maverick down before finding Maverick’s back.

A tight rear-naked choke would be avoided by Maverick as she got up on the escape to hold Bennett to the cage looking for a takedown of her own which she got prior to the rounds end.

In the final round, the two continued to pick their shots but in a sped-up pace compared to the previous two round. Maverick’s counter punches landed well and she began to control the cage better as the round went on.

After the two engaged in the clinch, it became a positional battle against the cage. Bennett found herself looking for the takedown more than Maverick, but she couldn’t get it before the round fight ended.

The second of the two semi-final bouts was the match-up between top Mexican prospect Karina Rodriguez as she took on UFC vet, Milana Dudieva.

The first half of the round saw each fighter really trying to find their range. Dudieva got slightly more aggressive towards the end before hitting a nice takedown which led to some great ground and pound. Rodriguez was able to scramble up but Dudieva was all over her as she landed a big strike right at the bell.

To start round two, Dudieva immediately landed a stunning spinning back fist before exploding into a flurry that led to each woman engaging. Dudieva got a bit wild before attacking for a takedown that was stuffed. She would hit a trip shortly after to find her way into Rodriguez’ guard.

The pace had definitely slowed by the final round. Rodriguez was now in control as she utilized her movement and landed nice jabs to set up her combinations and just mix up her overall striking game. Dudieva couldn’t find really any success until the final thirty seconds where she hit a trip against the cage but couldn’t find a finish.

Rodriguez will now rematch Bennett to see who gets the next title shot.

After that, it was onto the big vacant title fight between the perennial top 5 Vanessa Porto and the rejuvenated Pearl Gonzalez.

The two exchanged leg kicks early and often before Gonzalez landed a straight right that got Porto to come in seeking the clinch which led to her back against the cage. A spin-off and break got Porto turned around before hitting a takedown on Gonzalez while she attempted a kimura to no avail.

Separation from Porto gave Gonzalez the chance to get up as well as Porto the chance to land some big right hooks as she entered into the clinch again before getting another takedown. Round ends with Gonzalez working from the bottom.

As Gonzalez started to open up in the early going of round two, Porto landed some strong leg kicks followed by elbows. One of those leg kicks would end up buckling Gonzalez’ leg which was shortly followed by a Gonzalez takedown attempt that was stuffed only to be countered into one of Porto’s own.

Starting mount, Gonzalez would transition out only to wind up in mount where Porto sunk in an arm triangle choke. Unable to get it, Gonzalez scrambled up to her feet just to get taken down again as the round ends.

Round three starts slowly in the first minute before Porto pushes forward to attack. Gonzalez threw shots that weren’t set up all too well. Porto found a takedown against the cage which led to her getting side control once again. Round ends with Porto leg kicking the downed Gonzalez.

Gonzalez began round four a lot quicker than the previous three with a higher volume output. Porto would end up getting eye-poked resulting in a bad enough cut that ended the fight.

The strike was deemed unintentional which led the fight to a technical decision.

Here are the rest of the results from the night of action: