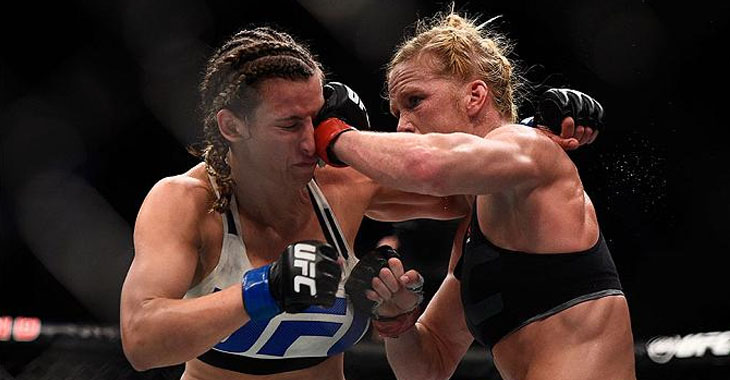 Back at UFC 193, Holly Holm shocked the world as she knocked out Ronda Rousey with a head kick to become the UFC women’s bantamweight champion in the main event of the thrilling card.

Fast forward just 4 months and Holm was submitted by Miesha Tate in the co-main event of UFC 196 on March 5th, losing the title in the 5th round of their scrap.

Now, ahead of Holm’s return to the Octagon on Saturday in Chicago against Valentina Shevchenko, Holm spoke to media members, where she admitted that she’s had some doubts since her loss to Tate:

“Every camp is different. I don’t really compare them because no fight is the same and no fighter has the same style, no training camp is gonna go exactly the same,” Holm said during a recent conference call. “So yes, It’s its own training camp. There’s definitely some emotions that I’m dealing with coming off a loss, those doubts here and that I’ve overcome through this training camp. I feel like I’ve learned a lot; I’ve improved a lot and my goal is to show those improvements when it’s time for the fight.”

“I think it was just that momentary lapse. As far as training, I was getting ready for her, I was preparing for her. I wasn’t overlooking her at all,” Holm said. “I do feel like I didn’t fight with the same sense of urgency the last round I should have been. It was that moment that I just made a bad decision. I didn’t react the right way in the fight and just a little lack of focus right there but I’m going to learn from the situation and move forward.”