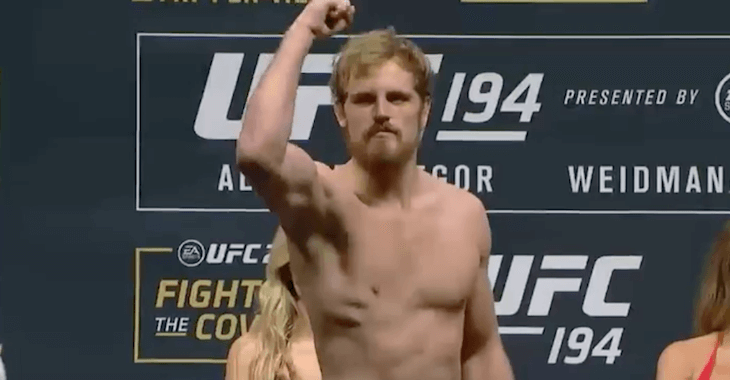 Earlier this month, in the co-main event of the UFC’s latest trip to London, England, Iceland’s Gunnar Nelson stepped onto the canvas with a very game Alan Jouban. Despite the scale of this test, Nelson passed it with flying colors, rattling his foe with a second-round punch, following up with a high-kick, and chasing him to the mat to seal the deal with a choke.

With this win, Nelson reminded the world why he is considered one of the best welterweights on the planet. Having done so, he can now look forward to fights with the division’s top dogs – and he has one particular opponent in mind to that end.

“I would love to fight ‘Wonderboy’  [Stephen Thompson],” Nelson recently told Fox Sports. “That’s a fight people seem to want to see. That’s the fight that’s most hyped up right now. A fight with him, a good win over Wonderboy would be huge for my career. I would love that, but as I said, I would fight any of [the top welterweights].” Nelson then explained that, if a fight with Wonderboy doesn’t materialize, he’d also be interested in a fight with former champion Robbie Lawler, who has not been seen in the cage since he surrendered the title to Tyron Woodley back in July.

“Robbie Lawler is a big one as well,” Nelson said. “Any of them guys. To be honest, I understand that I could fight Robbie or ‘Wonderboy’ and it would skip some steps to get that money and the gold and I like that idea. But, ultimately, I believe I will fight all those guys. In what order is not the most important thing to me.”

How do you think Gunnar Nelson would do against Robbie Lawler and Stephen “Wonderboy” Thompson? Sound off, PENN Nation!