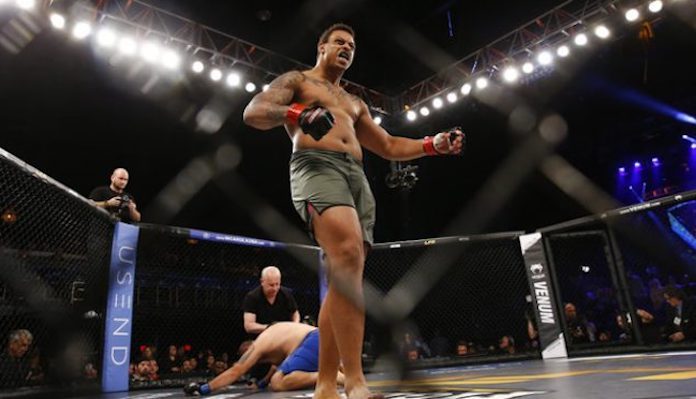 Greg Hardy is still undefeated as a professional MMA fighter, with a record of 3-0. While many MMA fans on Saturday night were watching Bellator 206’s stacked card, Hardy was fighting on the regional scene at XFN 352.

Hardy was taking on Rasheem Jones in the main event. Hardy came out and starched Jones before finishing him with the ground and pound just 53 seconds into the fight.

The fight was exclusively shown on UFC Fight Pass where Hardy is continuing to attempt to show the UFC that he is a legit fighter and a talent worth signing. Hardy has all three of his professional wins by knockouts and has never been past the first round.

Hardy’s power is unquestionable, but many fans don’t want to see Hardy fight in the UFC given his past. Hardy played six seasons in the NFL, including one pro bowl, but was out of the league, partly due to the allegations of domestic violence against him. Hardy was found guilty of assaulting an ex-girlfriend and was sentenced to 18 months probation. However, the charges were dropped after the alleged victim failed to appear in court and testify.

What is next for Hardy is a rather interesting question. He is signed to a development deal with the UFC, meaning he can not fight for other major promotions, but has not yet been given a standard contract.

Will he finally get a shot to fight in the UFC or will he continue to fight on the regional scene? The question is a big one that the UFC brass and the matchmakers will have to decide if it is finally time to invite Hardy to fight in the heavyweight division.

Do you think Greg Hardy should fight in the UFC in his next fight?