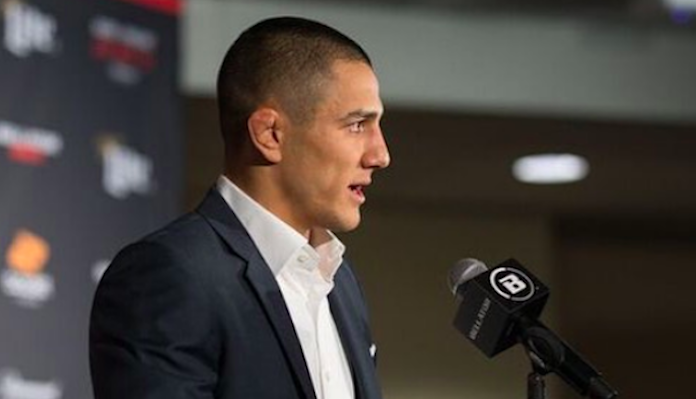 Shortly after this mammoth win, Pico gestured to Bellator featherweight champion Patricio “Pitbull” Freire, who was in Higo’s corner, and told the the champion that his time was coming too.

“It’s just passion,” Aaron Pico said of his choice to engage Freire in the cage. “I mean just looking around, watching him come with Higo, they act like they’re — I dunno, maybe it’s just the way that I was taking it. They had their little entourage and stuff like that. I don’t have a big entourage. I’m coming in here to fight. I’m coming to knock your head off, and I knew that’s what I was going to do. I looked at his team and Patricio’s no different. His time is coming.”

“I’m going to have a picture of him on my wall. As long as he’s the champion, I’m going to wake up every single day, look at him and look at that belt and think how I’m gonna get there.”

While Aaron Pico made no secret of his intention to take the title from Patricio Pitbull post-fight, he says he does respect the champ.

“I respect him, I respect Patricio Pitbull,” he said. “It’s not like ‘oh screw him, I’m coming to take your head off.’ I am, but I respect him. I know it’s not going to be an easy task, that’s why I train the way I do.”

Do you think Aaron Pico can eventually swipe the Bellator featherweight belt from the waist of Patricio Pitbull?