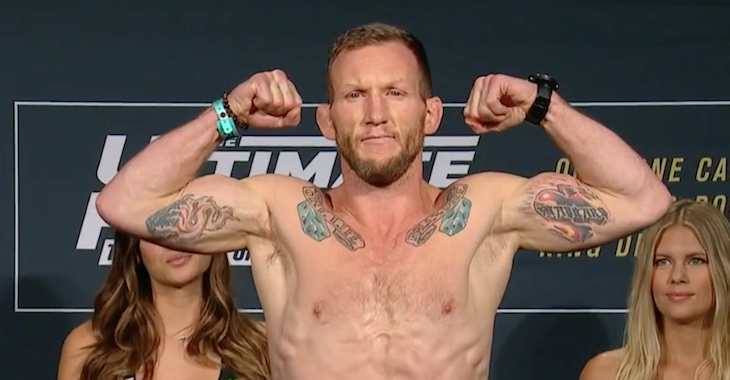 The way Hall achieved that win, however, was rather polarizing. While there are plenty of fans out there who were happy to call it innovative and clever, others found it rather unsavory, as Hall repeatedly flopped into guard, attempting to goad Maynard into a grappling exchange.

Maynard himself was part of this latter group. He was so put off by Hall’s strategy – and the loss it led to – that he reached out to Bleacher Report to vent about the ordeal.

“I’ve just been going over it in my head,” Maynard said. “I checked it out on tape. It’s definitely frustrating. I get that you want to play keep away. But every time a guy gets within two feet, you can’t just sprint away or just drop to the floor. He literally just dropped down to the floor. To the f*cking floor. I’ve never seen that in my life.”

“Everyone who knew him told us that he was scared to death of getting punched in the face. But this is MMA. You’re bound to get punched a couple of times,” Maynard said. “I understand he’s good at jiu-jitsu. Here’s a job for him—he has to learn how to take me down. You can’t just drop to your butt. He’ll keep doing that as long as he can. But where are the rules at? Who is enforcing the rules?”

Maynard’s criticism’s of Hall later continued on Twitter, as he debated his recent foil’s strategy with fans.

not how u dictate a fight if u want it on the ground. Flop on the ground like a wet noodle every time I engage.

guard pull is pulling me to the ground in his guard. Flopping is what he did

watch his fights. He gets to guard and stalls. Cause he doesn't want to fight

unorthodox is one thing. Laying down is just not fighting

During these exchanges, Hall took to social media to offer a response to Maynard – though that response only served to further aggravate the veteran.

ok buddy. I told you how I felt when we were in the back to. Your such a little victim

Needless to say, Maynard is not particularly pleased with his recent loss. Considering it pushed him to a rough 1-5 in his last 6, that’s certainly understandable.

What did you think of Ryan Hall’s strategy against Gray Maynard? Sound off, PENN Nation!