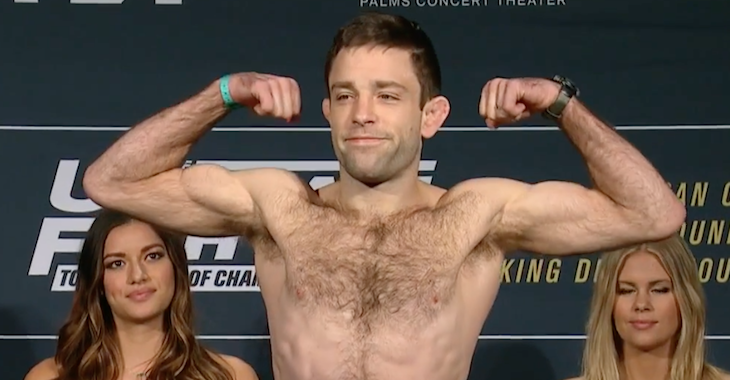 A featherweight tilt between Ryan Hall and Gray Maynard served as the featured bout of tonight’s TUF 24 Finale prelims in Las Vegas.

Round one begins and Hall misses with a high kick to start. He shoots in for a takedown but it is not there. Maynard presses forward and Hall dives in for another takedown attempt that misses. Maynard lands a kick to the body. Hall responds with a body kick of his own. Maynard charges forward and lands a right hand. Gray with a ton of forward pressure. He lands another right. Hall dives for a leg and attempts a submission. Maynard escapes and gets back to his feet. Hall chases after Gray and attempts to pull guard. Gray escapes and circles out. A right hand lands for Hall. Ryan with a high kick but Gray blocks it. Maynard charges forward with a right. Hall lands a head kick. Maynard is bleeding from his left eye now. Ryan lands a push kick. He comes forward with another high kick but it is blocked. Maynard lands a hard right. Hall tries to pull guard. Gray is not willing to go to the ground. Hall gets up and lands a spinning back kick. Gray with a right hand. Ryan with a kick. Round one comes to an end.

Round two begins and Hall lands a pair of kicks to start. Gray charges after Ryan and lands a right hand. Hall with a head kick that lands flush. Gray eats the kick and moves forward. Good push kicks from Ryan. Gray with another right hand. Ryan attempts to pull guard but Gray is not willing to do so. More push kicks from Hall. Maynard is frustrated with how Hall is fighting. Ryan is winning in total strikes though. Maynard misses with a front kick. Hall lands a beautiful side kick to the head. Gray looked stunned momentarily but appears to be fine. Gray goes to the body with a right hand. A low kick lands for Hall. Maynard replies with a head kick. Hall with a nice switch kick. Maynard responds with a right hand. Hall with another high kick that finds the mark. Maynard is trying hard to get inside but Hall is keeping him at bay with kicks. Maynard lands a right to the body to close out round two.

Round three begins and Maynard very well may need a stoppage here. Hall dives for a takedown but misses. Maynard works some kicks from the top while Hall is on his back. Ryan gets back to his feet and lands a nice hook kick. Maynard catches a follow up kick and lands a body shot. Hall dives for a leg and gets it but Maynard is able to scramble back to his feet. Hall lands a kick to the body and then a low kick. He dives for a leg and Gray catches him with a kick. Hall bounces back to his feet. He lands another nice head kick. Gray is frustrated here. 90 seconds remain. Gray throws a right hand and then follows Hall to the ground. He lands a hammer fist and then stands back up. Another hook kick lands for Hall. Round three comes to an end.