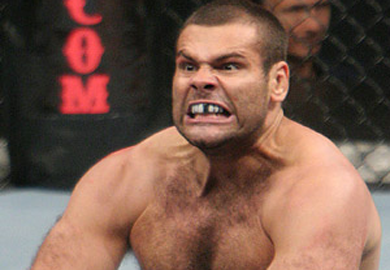 At this weekends TUF 17 Finale, UFC heavyweight Travis Browne (14-1-1 MMA, 5-1-1 UFC) was awarded a win as well as the “Knockout of the Night” bonus for disposing of competitor Gabriel Gonzaga (14-7 MMA, 9-6 UFC) via elbows, just 71 seconds into their fight.

At least a couple of the blows appear to violate both the no striking to the back of the head rule, and the 12-6 elbow rule. The referee may have ended the fight when the initial, legal elbows landed, and thus the later ones would not count towards a disqualification.

This is the position held by UFC president Dana White who addressed the matter during the TUF 17 post-fight media scrum:

“Me and Joe Silva looked at a replay of it on the Internet, he was out with the ones to the side (of the head), and then he hit him with a couple more to the back of the head after he was already out. That’s the way that I saw it.”

For his part, Browne says there was no ill intent:

“I remember hitting him with one, and the referee was right there, I could kind of see him standing off to the side, and he didn’t say anything. I hit him with two more, and by that time he was done. I just kind of stopped. I didn’t feel him fighting anymore. I try to be respectful in the cage, and if I know somebody can’t defend themselves, I’m not going to take advantage of that.”

Gonzaga’s manager, Marco Alvan, says the decision will be appealed to the governing regulatory body, the Nevada Athletic Commission.  Alvan made the following comments via Facebook:

“Guys Gabriel Gonzaga is ok, thanks for the messages,” wrote Alvan.

“I need to review it to count how many illegal elbows but Its a fact that it was illegal. I contacted Keith Kizer head of Nevada Athletic Comission and he told me to file a complaint and he would review it.
I true believe it was illegal. I never complaint about a losses who knows me know that I handle it good but illegal we can not accept.”

“We appeal to the Nevada State Athletic Commission because we think were the illegal elbows neck. Whenever we had accepted any defeat, but this was illegal.”

“This video is clear about the elbow.

“I very hope the commission look it carefully and make a correct decision about it. We respect Travis and his camp but it was a sad night. We hope this result can be fixed and get a new fight between them.”

What are your thoughts Penn nation? Let’s hear it!