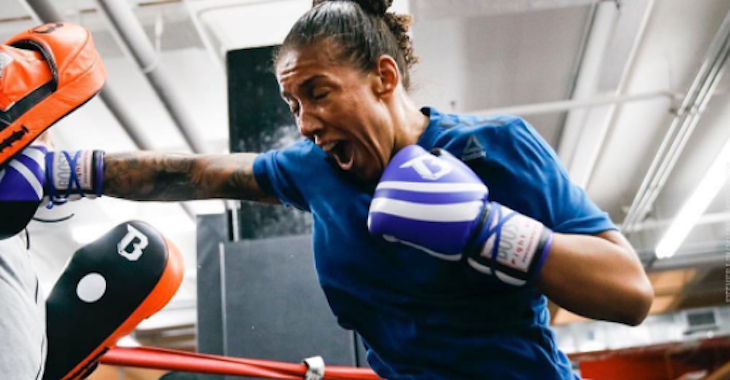 Earlier this year, in the main event of UFC 208, Germaine de Randamie claimed the UFC women’s featherweight title with a decision defeat of Holly Holm. Unfortunately, her title reign hit a snag when she refused to fight long-time contender Cris “Cyborg” Justino on the basis of Cyborg’s previous failed drug test. Unwilling to promote a champion who refused to fight top contenders, the UFC slammed down the gavel and stripped de Randamie of her title.

While this was an undeniably unfortunate twist for the Dutch striking specialist, she explained on Monday’s edition of The MMA Hour that the comments she received from her critics were far more stressful than the actual loss of her title.

“People can say I’m scared,” de Randamie said. “I don’t mind. As long as I can look myself in the mirror and know I’m not scared. People can say I’m a cheater, I know I’m not a cheater. Of course it hurts, but I can’t change a person’s mind. If they believe that, it’s their opinion. But all the other stuff? Yeah, it hurt me. That hurt me more than losing the belt.”

“That [other stuff] goes deep,” de Randamie continued. “It’s not only for me. This involves many other people. How many kids have been bullied, have committed suicide? I think that’s horrible. My only mission in life is to share what I love so much with the people that love it as much as I do.

“I’m talking about a lot of people who told me I should commit suicide and that I’m worthless. I’ve never been rock bottom, but it did hurt me. It hurt me because people think it’s OK to write something to somebody like that.”

“I don’t care about the belt. What I do care about is staying me. It’s OK that they took away the belt. The only thing that I cared about was the things that people said.”

Germaine de Randamie will next step into the cage on September 2 in Rotterdam, where she’ll take on Marion Reneau at bantamweight.