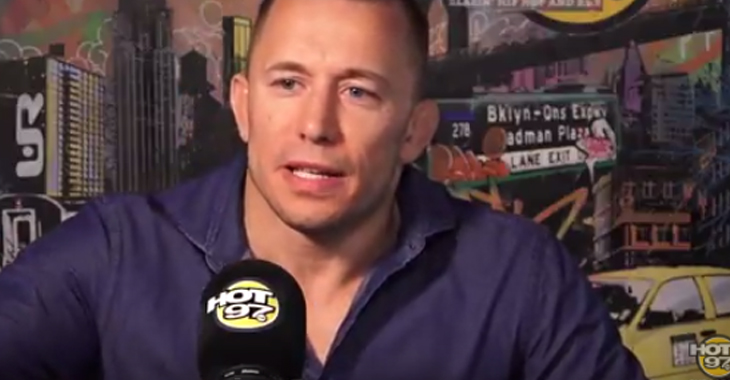 We’re still about a month away from UFC 217, but the media around the super-stacked card is already beefing up. With great risk comes greater rewards, as the former king of the welterweight division Georges St-Pierre returns to challenge Michael Bisping for the middleweight title. Coming back after being absent from the sport for so long and capturing a title at a higher weight would be an incredible achievement to place in his legacy. It wasn’t always like this, the MMA GOAT-candidate came from humble beginnings. In a new interview with Hot 97, St-Pierre opened up about getting bullied when he was younger and recently ran into one of the culprits back home.

“A few months ago, I was in the street and I saw one of the guys that used to bully me. I saw him and he was begging in the street. I don’t know if he was homeless, but he was asking for money. When he saw me, he recognized me. I don’t want to mention his name but I asked what are you doing here? ‘Can you help me, things are not going well?‘ Man, what are you doing here? You’re tall guy, good looking, what the hell? You’re in good shape.  I gave him a few dollars and I told him to get out of here, man. You should be ashamed. You should be embarrassed of what you’re doing. A lot of guy would kill to be like you. You’re full of potential. Go do something with your life.”

“Apparently, like a month ago he went to my house where my parents live, knocked at the door and he said, ‘Can I talk to Georges?‘ My dad says Georges doesn’t live there anymore. He goes, ‘Well, I met him a few months ago and he said something to me to shake me up. I just want to say, he changed my life. Now I have a job and I’m doing well and when you see him, tell him I said thank you.’ […] When I was bullied, I didn’t enjoy it. I make jokes about it. I have a very good record as an MMA professional fighter, but if you go in my bullying times, I have a losing record. I got beat up pretty bad.” — Georges St-Pierre on Hot 97.

Just as Peter Rosenberg said in the interview, that’s normally a story that would end with someone getting punched, but Georges St-Pierre decided to help a tormentor from his past. He also may have been saving all his aggression for his long-awaited return to the Octagon. Georges St-Pierre will fight Michael Bisping at UFC 217 on November 4th for the UFC middleweight championship.