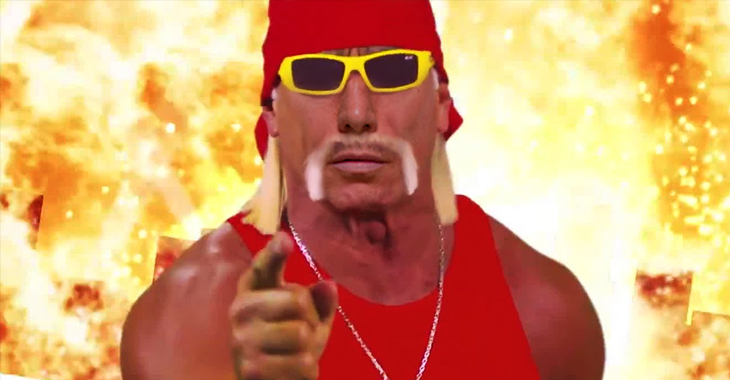 We don’t have to tell you that Georges St-Pierre’s life is ridiculous. He came back after four years away from the sport and took the UFC middleweight title away from Michael Bisping. That accomplishment is extraordinary in and of itself, but even away from the sport, St-Pierre does some awesome stuff. He literally went searching for dinosaur bones with the History channel. As famous as he is here, he’s practically a deity in Canada. Even celebrities and athletes from other sports want to hang out with the man. Even Hulkamania was running wild getting to chill with Georges St-Pierre.

Last night, had the chance to hang out with two good guys – @davidguetta and the one and only @HulkHogan!!! pic.twitter.com/asAz1h23XJ

How many fans just ripped their shirts in half? We could spend an entire day imagining what adventures St-Pierre, DJ David Guetta, and Hulk freakin’ Hogan were getting into on a night in Miami. There’s no doubt it was incredible. Hopefully they exchanged information and this is a bromance than can be nurtured. Can you imagine GSP running to the Octagon in his next fight with a Hulk Hogan bandanna flapping in the wind? Reebok deal be damned.

Running strong in Miami with GSP, the greatest fighter ever,we could be the next@WWE tag team champions brother. HH pic.twitter.com/l6qIFM7sv4

The Hulkster even mentioned the idea of Georges St-Pierre and himself teaming up. Could there be a bigger two forces coming together than that? We can see it now, picture St-Pierre with a deep tan giving out tear-away Rushamania t-shirts while Hulk Hogan walks him out the Octagon. Both of them cupping their ears and beckoning the crowd for cheers in victory. The world hasn’t seen a team like this since Macho Man Randy Savage and Hogan shook hands.