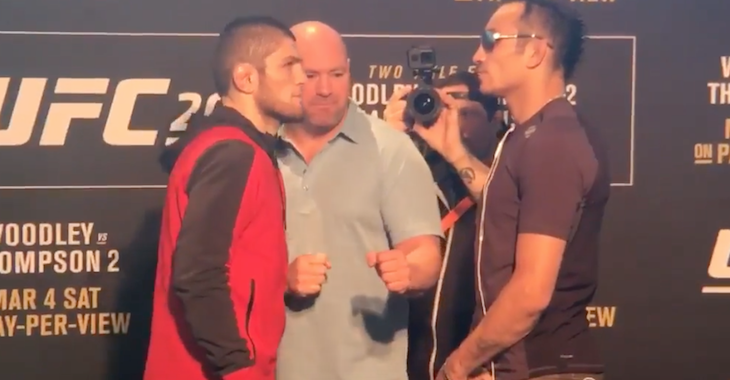 The last UFC card of the year is fast approaching and there is yet another big lightweight fight that can decide who is in contention for the throne. Eddie Alvarez put on a slobberknocker of a fight against Justin Gaethje, rocketing him back up to the top, but Khabib Nurmagomedov is facing Edson Barboza to hold his place at the front. Meanwhile, Tony Ferguson is waiting to unify the titles against Conor McGregor. And who blames him? Nurmagomedov’s coach Javier Mendez sure doesn’t, but it’s why he’s not too confident that the Ferguson fight is next.

“If that fight [with Tony Ferguson] does come together, it’s gonna be because Conor [McGregor] vacated the title. That’s the only way I see that happening. Otherwise, Tony’s gonna hang in there for that golden nugget, and I don’t blame him. He wants the fights for that big money, but you know what, there also comes a time too with the time of limitation too. You can’t hold on forever. You can’t hold the division on forever, you know? You’re eventually gonna have to be put in a situation where if you don’t fight Conor you’re gonna have to fight somebody. So, the only fight that makes sense for Tony if Conor doesn’t fight him, is Khabib. That’s it. There’s no other fight that makes sense, there’s no other fight that people will buy into.”

Will @TeamKhabib Make Weight? 🖕🏽😎 I’m Sure The Odds Are Great!!! I… CEO of #TeamTiramisu Will Be Reporting Day Of Weigh Ins… Stay Tuned 🏆😎🏆@arielhelwani

“This is about pay-per-view, guys. This is about eyeballs to the screen, and I’m telling you right now that no one’s gonna watch as much as – Conor and Tony is gonna be the most eyeballs, the second most eyeballs is Tony and Khabib, because they’ve had the three times they were supposed to fight. Twice Khabib and one time Tony couldn’t come to the show. So to me, that’s the second most important fight for Tony. But the number one is Conor, because it’s obvious, you know? Conor’s the biggest star we’ve ever had in MMA. I could even see heavyweights wanting to fight Conor because of the pay-per-view dollars, right?” — Javier Mendez speaking to Submission Radio.

Leading into 2018, it looks like Tony Ferguson does have his eyes set on a fight with Conor McGregor, especially after leading the ‘Defend or Vacate’ campaign all year long. You can never know with McGregor, so if he ends up taking a superfight with Georges St-Pierre or something, the UFC could make Ferguson the ‘undisputed’ UFC lightweight champion and Khabib Nurmagomedgov could get his shot. However, he’ll have to at least get through Edson Barboza at UFC 219 first.