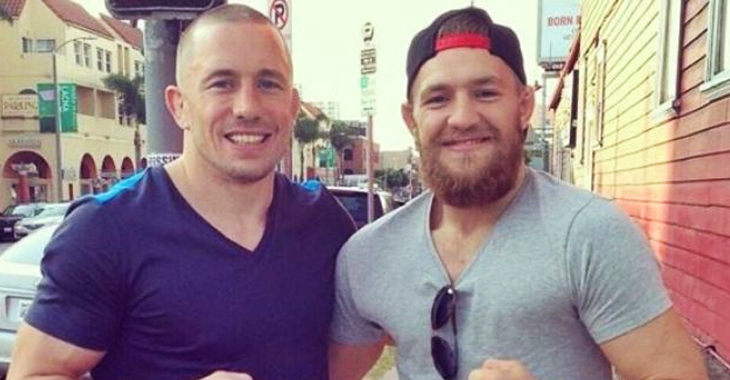 Everyone knows Georges St-Pierre touched down back into the UFC to challenge for the middleweight title against Michael Bisping. He’s gone on record saying that if he wins, he’s contractually obligated to defend against interim champ Robert Whittaker. If he loses, St-Pierre has said he will retire. Win or lose, his teammate Olivier Aubin-Mercier thinks that GSP should call out none-other than Conor McGregor for the biggest UFC fight of all time.

“To tell you the truth, I would not [keep fighting], but Georges [St-Pierre] is truly a real fighter, a real warrior, a real inspiration. He may fight again, I’m not sure. I think what would be plausible is to call out Conor [McGregor] after [the fight with Michael Bisping]. That’s what I would do. Call out Conor. I think for the UFC, it’s a really smart fight to do too, since it’s a win-win of them. A win-win kind of, for the short time. If Georges wins, well, he’s the greatest fighter of all time. If Conor wins, he is too. And if GSP wins, I don’t think people would hold it against Conor.”

“[Georges St-Pierre] didn’t talk to me [about fighting Conor McGregor]. I didn’t even know that Firas [Zahabi] had talked about it. I thought I was the first one to think about it, I’m kind of disappointed. I think Conor is a smart fight for anybody in any division right now. Yeah, exactly, [a fight with Conor McGregor would be the biggest fight to make]. I think the promotion of the [a fight with Robert Whittaker] would not be like Bisping against him or Conor against him since both GSP and Whittaker are humble guys. Unfortunately, fans don’t really like this.” — Olivier Aubin-Mercier on The TSN MMA Show.

The hosts of The TSN MMA podcast informed Aubin-Mercier that St-Pierre’s coach, Firas Zahabi, originally wanted the match-up as well. Aside from Nate Diaz, there aren’t too many big mega fights in MMA for Conor McGregor and it will be difficult to ever come close to the astronomical money he made fighting Floyd Mayweather. Georges St-Pierre could be the biggest fight, not just McGregor, but both of them could have in the UFC.

“I think he should fight Conor McGregor or Michael Bisping, and I’ll tell you why: Michael Bisping will give him a two-title championship, and if he fights McGregor, it’ll be the greatest fight in UFC history.” – Firas Zahabi back in May to MMA Junkie.